Nothing says “December in D.C.” like the mad dash to haggle over end-of-year tax extenders – and the energy sectors is no exception. Since this ritual opens the door to plenty of misinformation and special interest lobbying from renewable energy opponents, this post will help hammer out the facts.

The end of 2013, just like the end of 2012, 2008, 2005, 2003 and many years prior, brings with it the expiration of the Production Tax Credit for Renewable Energy (PTC). Thanks to a long history of federal support, the incumbent fossil fuel sectors enjoy solid business certainty provided by permanent, embedded federal tax breaks. Renewable energy, however, being the (relatively) new kid on the block, does not have this luxury.

In early December, the fossil fuel-aligned and notoriously anti-PTC Institute for Energy Research released a report on the state-by-state impacts of the PTC. IER used state-level tax data to attempt to “calculate the net impact of federal wind subsidies on each state.” By creating this so-called “proxy PTC payment” metric, IER tries to make the case that wind-heavy states are effectively “subsidizing” other states that incorporate fewer wind resources into their power mix.

Now, it doesn’t take a PhD in economics to see why this type of analysis is flawed. By IER’s logic, the “domestic manufacturing tax deduction for oil and gas,” for example, would be unfairly slanted in favor of O&G-producing states — with the likes of Maryland, Nevada and Missouri “subsidizing” states like Texas, Louisiana and Oklahoma. The fact is, energy tax credits, the PTC included, are intended to support the energy industries, not the actual states themselves.

The glaring flaws in tax credit attacks don’t stop there either. Here are the top three reasons why the IER, the AEA and other anti-PTC opponents are getting their facts backwards on tax policy for renewable energy:

Many opponents of the PTC and other federal incentives for renewable energy will rarely admit that these incentives spur major economic growth in the states. Take Michigan, one of IER’s top “loser” states: Michigan is about to join the elite “Gigawatt Club,” for wind as recently highlighted by CBS Detroit. The PTC helped build a regional wind industry in Michigan that’s now comprised of over 40 local businesses and 3,000+ in-state jobs. IER calls Michigan a “payer” state because they don’t currently have as much wind energy production (therefore taking lesser advantage of the PTC) than states like Oklahoma or Texas. But aNovember report from the Michigan Public Service Commissioner notes that, as costs of wind power have come down dramatically and capacity has doubled, Michigan would be able to “meet increased Renewable Portfolio Standard targets of as much as 30% (or perhaps higher) from resources located within the State.”

Clearly, IER and the anti-renewable energy incentives crowd are being willfully ignorant by not discussing these obvious benefits. Perhaps it’s understandable – after all, that’s how lobbying works – but it doesn’t make it truthful. At the end of the day, the PTC has very helpfully aided a promising American industry that creates jobs, local benefits and lowers consumer costs.

2) After 100+ years, energy tax policy shouldn’t be much of a debate at this point.

Another common oversight is the larger role of tax policy as it relates to energy production. It’s a well-known fact that fossil fuel procurement has been subsidized since at least the early 1900s. How often, for example, do we hear about the 12 special provisions of the U.S. tax code that subsidizes fossil fuel extraction? Harvard Professor Joseph Aldy highlights one such tax subsidy enjoyed by the oil and gas industry:

Altogether, these tax subsidies for oil and gas production add up to over $41 billion over the next 10 years! But because many of the major tax preferences are permanently ingrained into the tax code (i.e. they don’t expire like the PTC), they don’t undergo the same scrutiny and condemnation as the PTC, ITC and other renewable energy tax preferences that are not permanent. The on-again-off-again nature of the PTC also severely undermines business certainty, providing yet another advantage to competing energy sectors.

3) The PTC’s distributional effect is the rule – not the exception – when it comes to targeted tax code applications.

Finally – and this is perhaps most relevant to the most recent IER report – there’s no such thing as a tax preference that does not inherently incur some “distributional impacts.” Remember those 12 oil and gas tax subsidies? Check out this BLS chart of oil and gas jobs: 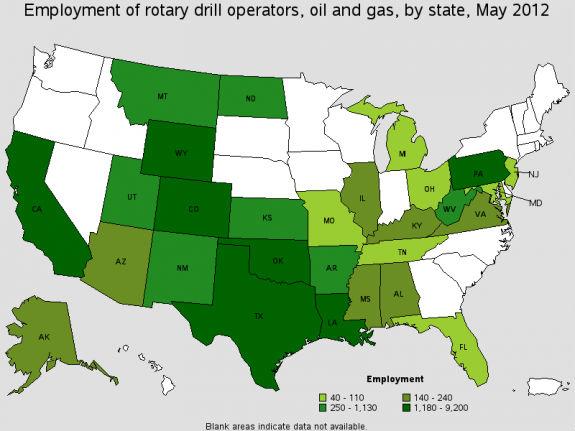 If that doesn’t look like very even distribution of benefits, it’s because, well, it’s not. When tax breaks are applied to certain sectors (say, wind energy, or oil and gas production), the regions with concentrations of those sectors are going to benefit greater than other regions without said production.

Now let’s look at the EIA data mentioned at the beginning of this post. Here is the chart for crude oil production:

The absurdity of IER’s report is obvious – all we’ve learned is that states with more industry benefit more greatly than other states from targeted tax preferences than states with less industry. This has nothing to do with the PTC – it’s just how tax preferences work.

It’s unfortunate that so much debunking has to take place in the energy space. In Washington, it’s often easy to fall into a pattern of buzzwords, lobbying tactics and spin. But ACORE is a business-focused organization and as a result, we have hundreds of successful renewable energy businesses who would beall too happy to tell you the real story behind the renewable energy industry.

Public policy has always been and probably will continue to be an important driver of our nation’s energy infrastructure. Letting some sectors in while shutting others out is neither smart nor fair. At the end of the day, every state can truly benefit from a strong, all-American renewable energy industry.