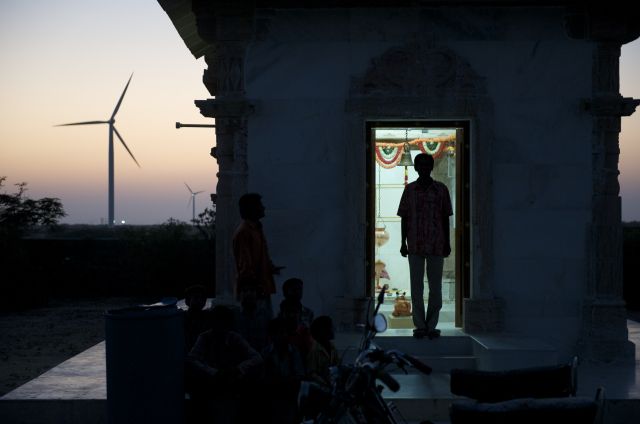 India has some of the world’s most ambitious renewable energy goals. Prime Minister Narendra Modi promised to boost India’s solar energy generation capacity from 5.8 GW in 2014 to 100 GW by 2022. As part of the Paris Agreement, India set a goal to increase the share of non-fossil-based power capacity from 30 percent today to about 40 percent by 2030.

Companies are eager to help meet these goals, given the cost savings and environmental benefits of renewable energy, but many face barriers to sourcing wind and solar power. A lack of long-term certainty in policy implementation and limited access to innovative business models and financial products hold companies back. Though commercial and industrial customers account for close to 52 percent of India’s electricity consumption, they have yet to make significant progress on renewable power.

Solutions are emerging. India’s Green Power Market Development Group (GPMDG), led by the World Resources Institute (WRI) and the Confederation of Indian Industries (CII), brings together government, utilities, regulators, companies and energy developers to scale up renewable energy purchasing in the private sector. So far, the group has worked with over 30 leading businesses in India to facilitate 200 MW of renewable energy transactions across several states, including Karnataka, Tamil Nadu and Maharashtra. GPMDG aims to bring 1,000 MW of additional clean energy online by 2020, enough power to energize 200,000 typical two-bedroom apartments.

Over the past four years, GPMDG has pursued several strategies to make clean energy procurement more streamlined and accessible to large buyers in India. A few key lessons are emerging:

In 2014, the Karnataka Electricity Regulatory Commission (KERC), a regulator, was deliberating on fixing long-term grid usage charges for renewable energy projects. Until then, KERC revised these charges every year. Members of GPMDG engaged with KERC to inform the regulators that the typical payback of a solar project is seven years; that means investors need price certainty for at least 10 years to boost their confidence enough to put their money into renewables. KERC viewed this recommendation positively, and has waived the grid usage charges for the first 10 years of all solar projects commissioned by March 2018.

In Bangalore, GPMDG has piloted projects to aggregate clean energy demand from large corporate buyers, such as Coca-Cola, Infosys, IBM, Cognizant and Philips. The pilots led to several lessons on how to structure transactions, achieve economies of scale and reduce costs. For example, when buyers are organized within a geographic area such as an industrial or business park, it is easier to aggregate demand for large renewable energy purchases. Also, buyers need to be segregated based on the type of contract that they want to enter — capital investment or a power purchase agreement.

Based on these lessons, GPMDG is now attempting to scale aggregated renewable energy procurement in industrial parks like Mahindra World City, Chennai to exploit the benefits of scale and co-location.

GPMDG hosts an annual national event and quarterly steering committee meetings by state. At the most recent summit in Mumbai, more than 30 participants shared ideas and decided on a strategy to engage utilities, regulators and government to resolve policy and regulatory barriers for procurement of renewable energy. Such community building helped secure long-term clarity from KERC for solar energy, as described above.

4. Companies need time to find developers who can meet demand at the right price.

In a recent webinar, Vince Digneo and Sujatha Ganapathy of Adobe discussed the extensive due diligence needed to finalize a solar power purchase agreement (PPA) for their Bangalore and Noida operations. Some developers lacked the land to put up a solar plant and others did not have the technical capacity to deliver power. A request for proposal (RFP) that required developers to deliver power within three months of a signed PPA helped ensure quality of bids, but the process still took over a year from start to finish.

Corporate Demand for Renewable Energy Across Southeast and South Asia

India is not the only economy in Asia dealing with increasing energy demand from a growing commercial and industrial sector. Major businesses are looking to Indonesia, the Philippines and Vietnam to site manufacturing and other commercial operations.