According to Solar and Nuclear Costs – The Historic Crossover; Solar Energy is Now the Better Buy, from John O. Blackburn, a Duke University professor of economics, solar photovoltaic (PV) energy-generated electricity now costs around 14-to-19 cents per kilowatt-hour (kW-hr) and nuclear plants in the planning stages will not be able to sell their electricity at less than 14-to-18 cents per kW-hr. That makes NOW the “crossover point” at which solar achieves price parity with nuclear and it makes “16 cents per kW-hr” the numeric formulation heralding the arrival of what visionary Hazel Henderson called The Age of Light. ::continue::

Nuclear power cost expert Mark Cooper, a senior fellow for economic analysis at Vermont Law School’s Institute for Energy and Environment, says the cost of a nuclear power plant went from ~$3 billion per reactor (average) in 2002 to ~$10 billion per reactor (average) in 2010. (Costs are, of course, somewhat variable by region.) (See THE TOO, TOO COSTLY CASE OF NUCLEAR POWER)

Opponents of solar PV often say it is only competitive because of subsidies. But a report in 2000 – when nuclear plants were only enormously expensive and not prohibitively expensive – found that ~$151 billion in federal subsidies went to the wind, solar and nuclear industries and 96.3% of it went to nuclear.

In late 2009, both Citigroup Global Markets and Moody’s issued official statements warning against investments in nuclear. Even nuclear energy industry advocates can no longer deny the widely reported evidence that nuclear power plants are more and more expensive to build. Marvin Fertel, President and CEO of the Nuclear Energy Institute, recently issued a statement admitting it is not a good time to invest in nuclear. 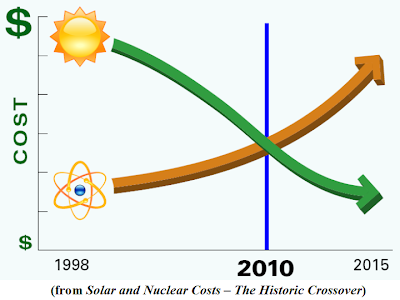 The nuclear industry has devised a couple of strategies to get around the unaffordable costs of building their plants. One is to shift the risk to the U.S. government by demanding federal loan guarantees. Another is to shift the risk to ratepayers by using the “construction work in progress” financing system that adds a fee to each utility customer’s bill for new plant construction and keeps them paying for 6-to-12 years before getting any electricity for their investment.

There are good reasons to reject such multi-hundred billion-to-trillion dollar schemes in favor of using the money to build more cost-effective forms of emissions-free electricity generation infrastructure like wind and solar.

The 1980s nuclear “boom” is now regarded as a managerial disaster and it cost electricity users an estimated $100 billion.

Nuclear proponents say that will not happen with modern plant designs and technology but only one of five proposed designs now being considered has ever been built. New technology, no matter how well thought out and tested, inevitably introduces unforeseen complications. Cost over-runs, at the very least, are a veritable certainty on the proposed plants. Cooper said 90% of those with applications pending have had a delay, a design problem, a cost increase or some other financing problem.

The only thing that keeps proponets’ dream of a “nuclear renaissance” alive is global climate change. Nuclear is, at the plant, emissions-free power generation. Lobbyists have been able to get government attention and negotiate loan guarantees and tax breaks in compromise deals with New Energy advocates fighting for a sliver of subsidy money.

But a bad investment is a bad investment and some are finally realizing there is little point in throwing good money after bad. Loan guarantees make credit for the billions that go into nuclear plants cheaper but lay all the risk off onto the taxpayer while retaining all the benefit for investors.

Meanwhile, there are much better ways to use taxpayer money. New Energy (NE) and Energy Efficiency (EE) grow ever less costly and could easily meet rising demand for emissions-free electricity generation at a much lower cost. Only electricity generated by nuclear reactors built before Ronald Reagan left the Presidency is cheaper than NE and EE.

A calculation from Cooper found that the 100 new plants proposed by the advocates of a nuclear renaissance would cost taxpayers and electricity users $1.9 trillion-to-$4.4 trillion more than a similar investment in NE and EE capacity.

As Cooper pointed out recently, the very fact of the “nuclear renaissance” PR pitch demonstrates the industry cannot win its way with real numbers. What th4e nuclear industry is now discovering is that Wall Street knows the difference between a PR pitch and a good investment. If only Capitol Hill could make the distinction. 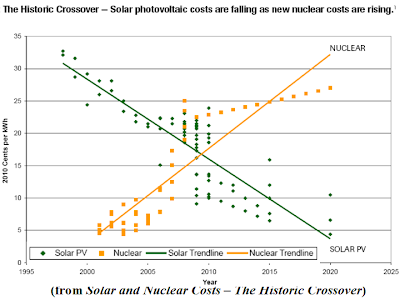