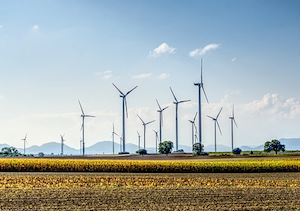 Greece is preparing to auction 2.6 GW of solar and wind projects to attract investment and beef up the Mediterranean country’s clean-energy credentials.

“From now on renewable energy production and prices will be determined by competitive tender process,” said Energy Minister George Stathakis. The “move should encourage investments in renewable energy of 2.5 billion to 3 billion euros, especially in wind.”

The government published the final rules for its first competitive tenders, which outline the timeline and size of the projects that will awarded. The first tender will be held July 2 and will hand out permits to build 300 MW of wind power and 300 MW of solar PV. The shift to auctions from feed-in-tariffs follows a move most renewable markets have made.

“There is a lot of interest from the established players in the wind market but there’s also a lot of interest from foreign investors, mainly private equity funds,” said Dimitris Assimakis, partner at Norton Rose Fulbright LLP, a law firm that’s advising companies on investing in the country’s renewables sector.

Greece is known for its sunshine, a key driver of its tourism industry, but it also has good wind resources. Like all European Union members, it has a legally-binding clean energy target and is aiming for 18 percent of energy consumption to be from renewable by 2020.

The country will tender 300 MW apiece of wind and solar annually from 2018 to 2020 and will also hold two auctions for 400 MW that will pit the two technologies against one another, starting in 2019. Total capacity procured will be 2.6 GW, about the equivalent of two nuclear reactors.

The auction in July will be open for wind projects between 3 MW and 50 MW and solar projects in two categories — less than 1 MW and between 1 MW and 20 MW, according to the government.

The European Investment Bank and the European Bank of Reconstruction and Development are active in Greece and will most likely be lending to developers of these projects. Last year, the EBRD committed to lend 300 million euros to finance clean energy in the Mediterranean country.