New Hampshire, USA — Led by Asia and other developing regions, the global wind market will grow at an annual cumulative capacity rate of more than 10 percent over the next five years, according to the Global Wind Energy Council (GWEC). The group released its annual report yesterday and discussed its findings on a press call.

The past year was a rough one for wind enegy due to the fact that for the first time in history less wind energy capacity was installed in 2013 than was installed in 2012.  From 1996 through to 2012, annual installed capacity for wind grew at an average rate of more than 20 percent but that percentage dropped dramatically in 2013 “caused by political uncertainty surrounding the tax laws in the U.S.,” according to Steve Saywer, GWEC Secretary General.  The U.S. only installed about 1 GW of wind power in 2013, compared to more than 12 GW the year before. The chart below shows global annual installed wind capacity (courtesy GWEC). 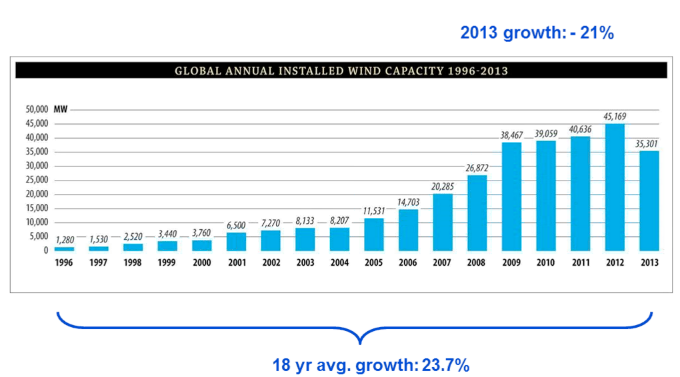 In terms of annual markets for wind power, China is the leader and will remain in that spot for the foreseeable future, said Sawyer. “Germany had a very strong year as did the UK but probably for the first time in history, Canada installed more wind energy than the United States,” he said.  Sawyer said that in 2014 Brazil could have a very good year. “It could be third next year.” The charts below (courtesy GWEC) show the top 10 countries for cumulative installed wind power today and the top 10 countries for annual installations of wind power in 2013. 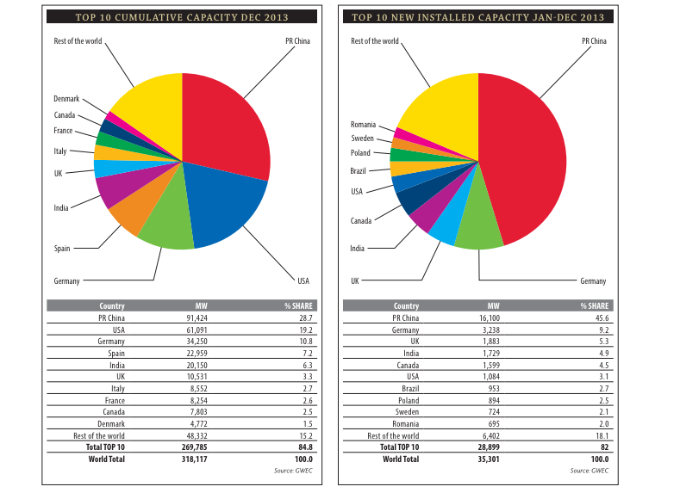 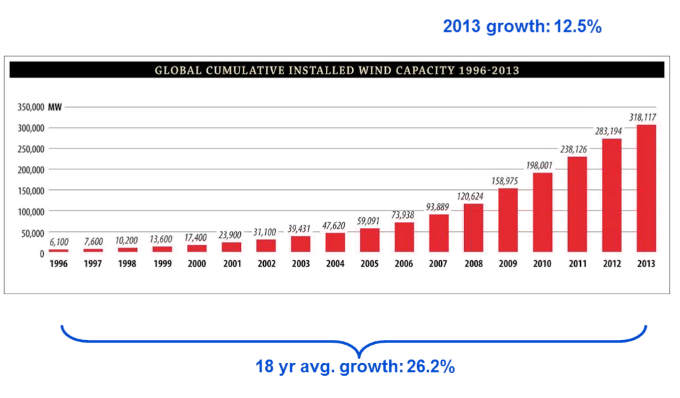 The Road Ahead  – A Steady March into Emerging Markets

Looking at the top 10 countries in terms of cumulative installed capacity, China is way out in front, followed by the U.S., Germany, Spain, India and the UK.  Sawyer sees this changing with more emerging markets installing more wind power capacity going forward. “India will overtake Spain in the relatively near future and probably by the end of this year we’ll have Brazil displace Denmark in the top 10,” he said.  Sawyer added that “a number of emerging markets [will start] slowing moving up the top 10 chart as the years go by.”

One of the upsides of 2013 being a down year for annual installations is that 2014 is expected to be an excellent year for wind.  GWEC predicts an annual growth rate of 34 percent in 2014 and a cumulative growth of 14.9 percent for this year with a total annual installed capacity of 47 GW.   “After that we are projecting that things will return to more normal rates of growth,” said Sawyer. The chart below (courtesy GWEC) shows the market forecast for 2014 – 2018.  Note that by the end of 2018, GWEC predicts that there will be just about 600 GW of installed wind power capacity, almost double where the industry is today. 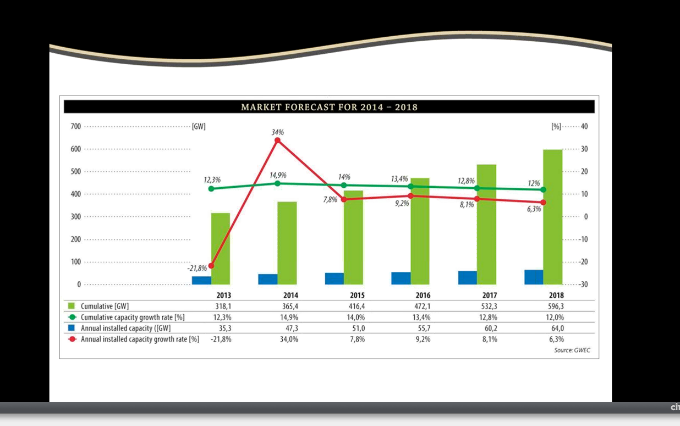 Wind Around the World

Markets around the world will continue to install wind capacity with the biggest regions – Europe, North America, and Asia – still installing the lion’s share.   In North America, Sawyer said that Mexico is a hot market for wind power. Sawyer explained that Mexico’s new energy reform legislation basically challenges the country to install about 2 GW of renewable energy capacity per year from now until 2024 to reach the target of 35 percent renewables by 2024 “and most of that is going to be wind,” he said.

Brazil is expected to double its wind power installed capacity in 2014, according to Sawyer. The country has a total installed capacity of 4 GW now and plans to install that much wind power in 2014. “The cumulative impacts of auctions and the build-out of the grid that is happening now is going to facilitate some fairly dramatic growth in Brazil over the next couple of years,” he said, adding that depending on what happens in the country’s elections and if Brazil can bring more stability to its economy, “it could be much larger.”

Another hot market for wind power is South Africa, according to GWEC. There is almost 1.2 GW of wind power either under construction or ready to start construction right now and another 800 MW that has been awarded a contract and is awaiting funding.  “We expect [those 800 MW] to get financial close during the first half of this year,” said Sawyer.  Sawyer said that the South African government has called for 9 GW of wind energy to be installed by 2030.

Sawyer mentioned other African markets such as Tanzania, Kenya and Ethiopia as poised for good growth in wind power.  Ethiopia, in particular, has “some of the best wind resources in the world and has a fully developed plan to get up to about 7 GW by 2030,” he said.

Moving into Asia, Sawyer believes that there are many “potentially substantial” markets besides China, India and Japan. Even though it is one of the smallest in terms of population and electricity demand, Mongolia could be a very big wind market, said Sawyer.  “There are tremendous opportunities for not only powering the growth in the country with the highest GDP growth rate in the world, but also exporting that power to China and through China to other countries in Asia,” he explained.

Vietnam, Pakistan and Sri Lanka all have excellent wind resources, a need for power, and projects coming online in the near future, according to Sawyer. In addition, Thailand has “a very good regime” for wind power, he said.

GWEC is watching the elections in India and remains optimistic that the country could end up with a much more “activist” government in terms of “developing the infrastructure that is necessary to spur significant growth in that very dynamic and growing economy,” said Sawyer.

In Latin America, beyond Brazil GWEC is seeing positive signs in Chile, Uruguay, Nicaragua, Panama, Costa Rica and some of the smaller Caribbean islands. The charts at the bottom of the page (courtesy GWEC) show the annual and cumulative market forecasts by region from 2013-2018.

Downward price pressure on wind turbines will continue, according to GWEC.  The drive to be more competitive than “the incumbents” and the continued oversupply of turbines will keep pressure on manufacturers, straining margins and forcing them into new markets.  Sawyer said that many companies were “hurt over the last several years” because their domestic markets took a hit.  “They are realizing that being based in a single home market is a dangerous strategy,” he said.

Finally, unless and until there is a global carbon price, wind power won’t reach its maximum potential, said Sawyer.  The 2015 climate meetings could result in such an agreement however even if one were to be put in place “we can’t expect that to have a major impact until sometime after 2020,” he said.

Without a global climate agreement, GWEC will remain focused on regional markets and legislation. The drivers that brought wind to where it is today remain in place, he said. Energy security, cost stability, local economic development and job creation are still some of the benefits that wind energy offers.  These are “increasingly prominent” said Sawyer.

“And so we look forward to a strong signal from governments about our efforts to protect the climate but in the meantime we have to get on with it on a market-by-market basis,” he concluded. 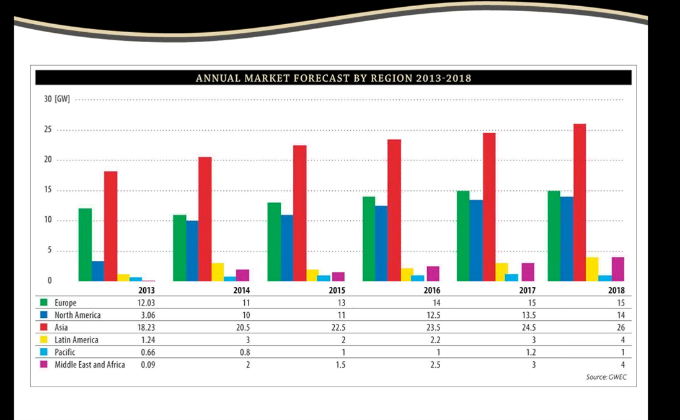 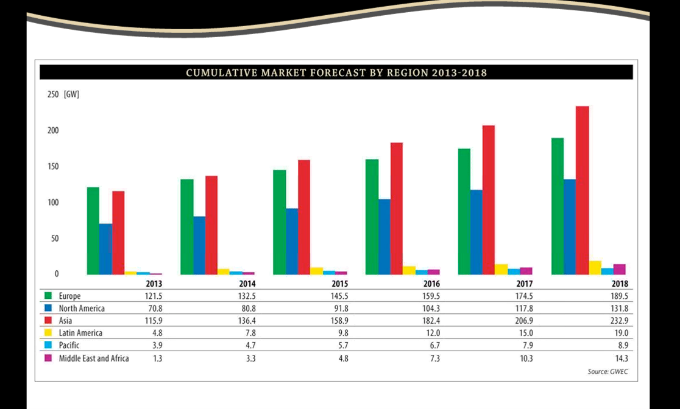 You can download the entire Global Wind Report Annual Market Update 2013 at this link.