In 2014, China was the leader in new installed capacity. The country put up 23 GW of new wind, bringing its cumulative total to more than 114 GW. Brazil moved up to the 4th largest market in the world for wind power in 2014 (installing 5.9 GW) and entered the top 10 in cumulative rankings for the first time. The African market took off in 2014, and Germany, Chile, Canada and Turkey also had record years. 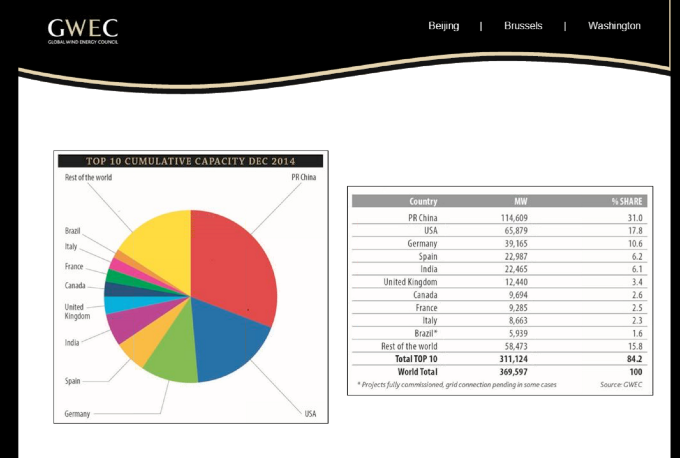 “Wind power’s growth is increasingly driven by its competitive pricing, as well as because it enhances energy security, price stability and (especially in China) through the need to address the choking smog that is increasingly making major urban areas in the developing world unliveable,” said Steve Sawyer, GWEC Secretary General.

The U.S. market recovered in 2014 from a dismal 2013, and looks set for at least another two strong years. The market in the U.S. after 2016 remains unclear due to policy uncertainty.  Canada will remain strong for the next two years but it, too, has policy uncertainty beyond 2016, said Sawyer.

GWEC expects the 2015 market to top 50 GW again and reach 60 GW per year by 2018. Growth will continue to be led by China, which seems on track to meet its 200 GW well ahead of the government’s target of 2020; and the Indian market is expected to grow substantially in the years ahead. Latin America is becoming a strong regional market, led by Brazil, but with Mexico catching up quickly.

Sawyer said he was particularly bullish on the African market. The country installed nearly 1 GW in 2014 for the first time, and GWEC expects Africa to pass the 1 GW mark in 2015 and not look back. Led by South Africa, Egypt and Morocco, the organization expects to see a number of new markets emerge in the coming years, which will make Africa the fastest growing regional market, at least in percentage terms, in the coming years.

“Looking ahead to the UN climate summit in Paris at the end of the year, we call on governments to wake up to the renewable energy revolution in the power sector, and set ambitious targets to reduce greenhouse gas emissions,” concluded Sawyer.

Editor’s note: Look for a more comprehensive review of the global wind market, with updates on innovations in the sector, in the next issue of Renewable Energy World magazine. Subscribe here.