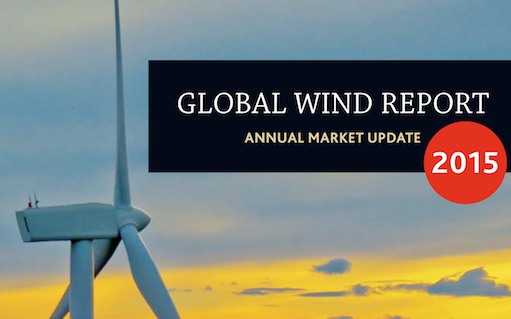 Today we at GWEC launched our Global Wind Report: Annual Market Update. The wind power industry set new records across the world last year, and wind is leading the charge in the transformation of the global power system, long overdue and very necessary to achieve the objectives agreed by 186 nations in Paris last December.

Up to 150 of those same nations will be meeting in New York this week to formally sign the agreement. Outgoing UNFCCC head Christiana Figueres predicts ratification could happen within the next two years, paving the way for the agreement to come into force in 2018, two years ahead of schedule.

We need the extra time. While there are many positive signals, Mother Nature is sending signals of another sort: weird weather, droughts, floods, record-breaking Arctic sea-ice retreat, and record high winter temperatures. CO2levels are rising at an alarming rate, and we are now in uncharted territory in terms of atmospheric concentrations of greenhouse gases, at least since Homo sapiens has been around.

So what does the Paris agreement mean for us in the wind power industry? Not a great deal in terms that can be translated into turbine orders and project approvals in the short term, but the medium- to long-term signal is very positive. One thing which is only just beginning to sink in with governments and the electricity industry, is that any credible scenario to stay below 2 degrees Celsius requires an emissions-free power sector by 2050 at the latest, preferably sooner; and if the 1.5 degrees Celsius target is to be considered, then it would be much sooner. Anyone making an investment decision to build a coal-fired power plant today is seriously risking having a stranded asset.

Wind power had yet another record-breaking year in 2015. After installations broke through the 50 GW barrier for the first time in a single year in 2014, we reached yet another milestone in 2015 as annual installations topped 63 GW, a 22 percent increase on the 2014 annual market. By the end of last year, there were about 433 GW of wind power spinning around the globe, a 17 percent increase over the previous year; and wind power supplied more new power generation than any other technology in 2015, according to the International Energy Agency.

China led the way, as usual, with a record 30,753 MW, breaking the previous record it had set (last year) for installations in a single year. China now has more than 146,000 MW installed, more than in all of the European Union; and last year it was the first country ever to invest more than USD 100 billion in renewables in a single year. China’s new Five Year Plan covering the period from 2016-2020 has increased the 2020 target for wind once again, up to 250 GW.

Europe had a surprisingly strong year, led by Germany’s record-setting 6 GW of installations, bolstered by more than 2,000 MW of offshore wind; and the U.S. market had a remarkable fourth quarter, ending with an 8.6 GW market in 2015, much higher than most had expected.

Brazil, Canada, Mexico and South Africa also had strong years, and we saw the first commercial wind farms in Jordan, Guatemala and Serbia. Perhaps the most encouraging sign of all is the continued proliferation of new markets across Africa, Asia and Latin America, spurred by the need for competitive, clean, and indigenous energy sources to fuel development.

Our forecast is for a period of steady growth for the next five years. Asia will continue to lead, and Europe will move steadily towards its 2020 targets. In North America, both Canada and the U.S. seem poised for another round of growth, and as Mexico’s energy reform gets bedded down, we should be looking at a period of rapid development in that newly liberalized energy market.

In Latin America, Brazil will continue to lead, although Chile, Peru, Uruguay and now Argentina will make a contribution. In Africa and the Middle East, besides market leader South Africa, both Morocco and Egypt seem poised for solid growth in the next five years, and smaller markets in Kenya, Ethiopia and elsewhere are moving.

In non-China Asia, India is the main story, which has now surpassed Spain to move into fourth place in the global cumulative installations ranking, and had the fifth largest market last year. Pakistan, the Philippines, Viet Nam, Thailand, Mongolia and now Indonesia are all ripe for market growth. All told, wind capacity should nearly double in the next five years.

Other than climate, two other major trends are having a major positive impact on the wind business:

We have a lot of work to do, and much could go wrong, but I am more encouraged than I have been in many years, perhaps ever. But we have lost precious time, and we have to move quickly.

We don’t need technological miracles to protect the climate. We have proven that we have the affordable, reliable, competitive technology to reach our goals. Perhaps, however, a political miracle (or two) is in order.