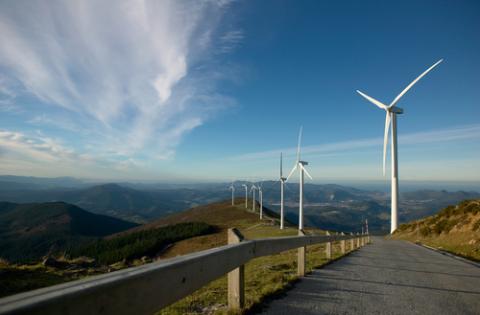 BERLIN — German Chancellor Angela Merkel is stepping back from proposals to reduce assistance for wind power to gain support for her energy policy from regional governments.

“Today is a good day for wind energy,” Torsten Albig, the prime minister of Schleswig-Holstein, said in a joint conference with Merkel and Gabriel late yesterday in Berlin. The state bordering Denmark added the most onshore wind capacity of any in 2013.

Nordex SE, one of Germany’s biggest wind-turbine makers, today rose to its highest since November.

Merkel’s government agreed to exclude projects that replace older onshore wind turbines, known as repowering, from a yearly capacity cap of 2.5 gigawatts. Schleswig-Holstein, Bremen, Hamburg and Lower Saxony had demanded such a move. It also agreed to reduce planned cuts to subsidies for turbines built at locations with low wind speeds, in a boon to developers eager to build projects in Germany’s southern states.

Nordex, the Hamburg-based producer that last year benefited from a surge in development of onshore projects, rose 9.6 percent to 13.145 euros by the close in Frankfurt, the highest level since Nov. 8. It was the best performer on the 106-member WilderHill New Energy Global Innovation Index.

“It’s wonderful to have clarity when it comes to repowering,” Ralf Peters, a spokesman for Nordex, said today by phone. “It raises the efficiency of onshore units and is good for us as a company.”

Merkel has said the switch to renewable energy from nuclear and conventional sources, or Energiewende, is her most important project. Agreements at yesterday’s talks mean she will meet a self-imposed deadline of April 8 to convince states and industry to back legislation setting new subsidies and capacity caps in a major overhaul to the 14-year-old EEG clean-energy law.

The government also agreed to halve the speed of regular subsidy cuts to new offshore wind farms in 2018 and 2019, and will permit more sea-based turbines, Gabriel said.

Stepping back from earlier plans to charge industry more for the clean-energy expansion, the government said companies that produce their own power in plants fired-up before Aug. 1 won’t have to pay the EEG-Umlage, a fee to finance clean-energy subsidies that has risen more than fivefold since 2009.

EON SE and RWE AG, Germany’s biggest power utilities, which have invested in onshore and offshore wind, declined to comment when contacted today.