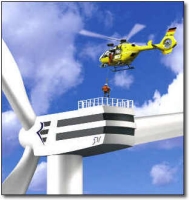 The “5M” turbine, designed and built by Germany’s REpower, was officially inaugurated at a dedication event in Germany this week with over 600 guests from business and politics. In a symbolic gesture, the turbine was activated by the German Federal Minister for the Environment, Jurgen Trittin. Germany has one of the strongest wind power markets in world. In bare figures, wind power already meets more than 30 percent of the electricity demand in the German states Schleswig-Holstein and Mecklenburg-Western Pomerania. Trittin, Volker Hauff, who is the president of the German Council for Sustainable Development, Chairman of REpower Fritz Vahrenholt and Chief Technology Officer for REpower Matthias Schubert, climbed up the prototype hours before the official activation. “We’re proud of the way our engineers and installers have successfully realized these new dimensions,” Vahrenholt said. “With our 5M technology, we will be able to produce power at competitive prices, particularly at offshore wind farms.” The machine has the capability of generating approximately17 GWh of power a year, which could supply 4,500 people in the region with electricity. The turbine’s LM Glasfibre 61.5 meter rotor blades — also the largest of their kind in the world — are constructed of a glass and carbon fiber hybrid-fabric that is held together with synthetic resins. REpower said the materials contributed to significant weight reductions for the blades. Each blade is equipped with its own electrical pitch system. Winds as low as 3.5 m/s will disengage the electromagnetic disc brakes and the turbine should have peak performance during winds of 13 m/s. Winds of 25 m/s or more will cause the turbine to cut-out. The nacelle was designed with a helicopter platform on the roof for ease of access in off shore applications, which the turbine was designed for. During prototype testing, however, the 5M will remain on-shore. Offshore projects are in the making though. During the event, Talisman Energy, coordinator of the EU-supported “DOWNVInD” project confirmed their plans to propose to the European commission the use of two REpower 5M turbines as a demonstration project 25 km off the coast of Scotland. In addition, a cooperation agreement was concluded with BARD Engineering GmbH as part of the development of the BARD Offshore I project in the German part of the North Sea. Final planning permission is expected for this year. REpower worked on the 5M project with LM Glasfibre, Offshore Wind Technologie and the Center for Renewable Energy Sources. Funding came from the European Commission’s Energy, Environment and Sustainable Development program; and the European Regional Development Fund through the German state of Schleswig-Holstein.