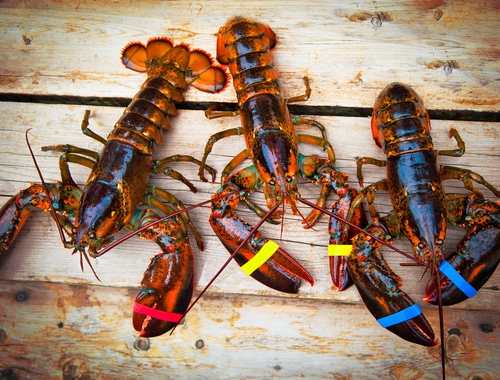 Scientists from the Alfred-Wegener Institute in Bremerhaven will release 3,000 lobsters next year around the stone field section of the foundations of EWE AG’s 108-megawatt Riffgat project. The gaps between the rocks make for ideal lobster habitat, said Heinz-Dieter Franke, a biologist at the institute.

“The stone fields at the many offshore wind farms built in the German Bight offer a new chance to strengthen the lobster population,” Franke said in a phone interview. The 700,000 euro ($918,000) project is being financed by the state of Lower Saxony, he said.

Wind farm developers including EON SE and RWE AG (RWE) are beginning to face the same scrutiny as oil companies for projects in sensitive places. While programs to protect porpoises from offshore wind construction noises have added costs for developers, the farms can become a safe retreat for fish and crustaceans as commercial fishing isn’t allowed near them, Franke said.

About 80,000 lobsters were caught a year in the south-eastern North Sea in the 1930s, Franke said. That number has dropped to a few hundred today, mainly as a bycatch of crab fishing. Since the 1950s and 1960s, the population has shrunk to as little as 5 percent of its original size for reasons that aren’t fully understood, he said.

The institute is raising the lobsters on the island of Helgoland and will release them in the late summer of 2014, when they’re about 10 to 12 centimeters in size and have a “very good” chance of survival, Franke said. If the Riffgat pilot project is successful, it could be repeated at other wind farms for much less money, he said.