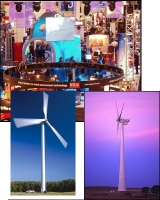 It’s not a bad idea to be able to drop some significant news at an industry trade show if you’re a key player in that industry. In this case, GE Wind, one of the wind power industry’s major global players, announced a number of newsworthy developments at Global WindPower 2004. Among them, the company was selected as the turbine supplier for the 30 MW Magrath Wind Power Project in southern Alberta, Canada.

Chicago, Illinois – March 31, 2004 [SolarAccess.com] GE Wind, one of the wind power industry’s major global players, announced a number of new developments at Global WindPower 2004. Among them, the company was selected as the turbine supplier for the 30 MW Magrath Wind Power Project in southern Alberta, Canada. Beyond this simply being a major wind power project, the development is noteworthy in two ways: it’s GE Wind’s first project in Canada, a country with vast wind power potential, and a functional federal tax credit similar to the U.S. production tax credit (which, much to the chagrin of the industry, is currently expired in the U.S.) Secondly, it’s a sign of confidence in the wind power industry as the project is being built without a long-term power contract, which has historically been essential to securing financing for wind power projects. GE will provide 20 of its 1.5 MW wind turbines for the wind farm, which is being co-developed by Suncor Energy of Calgary, Alberta and EHN Windpower Canada, a subsidiary of Corporacion Energia Hidroelectrica de Navarra, S.A. (EHN) of Spain. The project has been approved by the Alberta Energy and Utilities Board. Installation of the GE wind turbines is expected to begin in May of 2004 and completion is anticipated in August 2004. The project’s estimated generation, 90,000 megawatt-hours, is enough to meet the annual demands of approximately 13,000 Canadian homes. Believed to be the largest wind facility in Canada to be developed solely on a merchant basis, the Magrath project’s clean, wind-fueled electricity will be sold to the Alberta Power Pool, which was the first spot electricity market in North America. “This project is unique and reflects both the world’s growing commitment toward environmental stewardship as well as wind power’s growing acceptance worldwide,” said Steve Zwolinski, CEO of GE Energy’s wind operations. “The project is being built without a long-term power contract, solely to deliver to consumers and utilities electricity generated from clean, renewable sources.” The Magrath project will benefit from the Canadian government’s 10-year Wind Power Production Incentive (WPPI), which provides one Canadian cent per kWh of additional project revenue. The WPPI, announced in 2001, was designed to help establish wind energy as a full-fledged competitor in Canada’s electricity market. “This project marks the first installation of our wind turbine technology in Canada, a country with a huge potential for wind power,” said Zwolinski. “The Canadian Wind Energy Association has predicted the country could produce up to 20% of its electricity from the wind, and has called upon federal and provincial governments to adopt a goal of 10,000 megawatts of wind power by 2010. We are pleased our technology has been selected to play a role in helping Canada increase its supply of wind-generated electricity.” GE said their 1.5 MW machines are the largest wind turbines currently assembled in North America and are among the most widely sold and tested wind turbines in their size category, with more than 2,200 units installed worldwide. The wind turbines for the Magrath project will be assembled at GE Energy’s facilities in Tehachapi, California. In addition to supplying the turbines, GE will provide start-up support and operation and maintenance services through its Canadian division. Located about 200 kilometers southeast of Calgary, the Magrath Wind Power Project is Suncor’s second major investment in wind power. The company’s first renewable energy initiative is SunBridge, an 11 MW wind power project in Saskatchewan that is a 50/50 partnership with Enbridge. The two projects are expected to provide nearly 15 percent of Canada’s total installed wind power capacity.