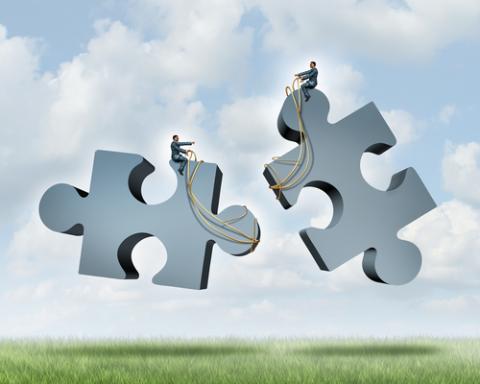 London and New York — General Electric Co. is in talks to buy Alstom SA, the French builder of trains and power plants, people with knowledge of the matter said, in what would be GE’s biggest acquisition ever.

An agreement may be announced as early as next week, said the people, who asked not to be identified because the talks are private. The U.S. company may pay more than $13 billion for Alstom, one of the people said. That would be about 25 percent more than its current market value. Alstom surged as much as 18 percent in Paris trading today, the biggest jump since 2004.

The deal would give the U.S. maker of jet engines and locomotives control of Alstom’s technology for power transmission and power plant maintenance as Europe’s economy starts to revive. A purchase of Alstom, which also sells high- speed TGV trains and rail signals, would be a rare example of a major French company being taken over by a U.S. rival.

“Acquiring Alstom would put an exclamation point on GE’s return to deals,” said Sanford C. Bernstein analyst Steven Winoker. “It is among the best fits we have seen with the GE portfolio for some time.”

GE has been shifting its focus toward units that make jet engines, locomotives and industrial equipment and shrinking the finance division, called GE Capital, which imperiled the company during the global financial crisis. Alstom, based in the Paris suburb of Levallois-Perret, has been selling assets to cut costs and reduce debt.

GE Chief Executive Officer Jeffrey Immelt would be able to tap the company’s foreign cash reserves to finance the deal, one of the people said. GE had about $89 billion in cash at the end of last year, including $57 billion held outside the U.S. Large infrastructure contracts increasingly require bidders to put up financing, putting Alstom at a disadvantage.

Fairfield, Connecticut-based GE has the support of Alstom shareholder Bouygues SA, said the people. The French conglomerate owns about 29 percent of Alstom.

“Alstom is not informed of any potential public tender offer for the shares of the company,” it said in an e-mailed statement today. “The group constantly reviews the strategic options of its businesses.” Seth Martin, a spokesman for GE, declined to comment. A Bouygues spokesman said the company supports Alstom and its strategy. He added that Bouygues doesn’t control Alstom, declining to comment further.

Immelt said this month that GE is looking to make acquisitions in the range of $1 billion to $4 billion and will spend more for targets “that have excellent values, strong synergies, fit our growth strategies and are immediately accretive.”

After years of holding back, large companies are staging a dealmaking comeback in western Europe, with the fastest start to M&A since 2008, before the global financial crisis. The value of takeovers involving companies in the region since the beginning of the year stands at $301 billion, up 20 percent from a year earlier, according to data compiled by Bloomberg.

About 640 French companies were acquired by U.S. companies over the last decade for a total of $77 billion, according to data compiled by Bloomberg. Among the biggest deals were the $7.2 billion sale of Danone’s cookies and crackers unit to Kraft Foods Inc. in 2007 and the purchase of Sperian Protection SA by Honeywell International Inc. in 2010 for $1.4 billion.

France’s government can intervene to protect companies it deems to be of national importance from being acquired. In 2005, it passed an anti-takeover decree amid speculation PepsiCo Inc. was planning a bid for Danone.

Alstom is the world leader in turbines for dams, while it lags GE and Siemens AG in gas turbines. It is the third-largest maker of power transmission gear after ABB Ltd. and Siemens, and competes with the German company and Canada’s Bombardier Inc. in the market for trains and other rail equipment.

Alstom CEO Patrick Kron in November outlined plans to sell as much as 2 billion euros in assets including a minority stake in its rail unit by the end of 2014. The company named Bank of America Corp. and Deutsche Bank AG to prepare the rail business deal, people familiar with the matter said in January.

Alstom also is cutting 1,300 jobs, mainly at its information-technology department and boiler units, to reduce costs by as much as 1.5 billion euros by April 2016. The French company is pushing for savings in Europe while investing in partnerships and plants in countries such as China, Russia, Brazil, India and South Africa to tap demand for trains and turbines.

GE and Alstom have already held talks with French government officials about the proposed takeover to preemptively address potential political concerns, one of the people familiar with the situation said.

Immelt has been shedding assets, including the sale of NBC Universal last year for $16.7 billion, and using some of the cash for acquisitions that fit his vision for the company. The company has made several purchases in the oil and gas industry, including paying $3.3 billion in April 2013 for Lufkin Industries Inc.

Alstom would be GE’s biggest acquisition, according to data compiled by Bloomberg dating back to 1986. The only deal that would have been larger was its attempt more than a decade ago to buy Honeywell for about $53 billion, including the assumption of debt, the data show.

Alstom had to be bailed out by the French government and banks in 2004 after a series of technical flaws in a gas turbine business it had bought from ABB pushed the company close to collapse in 2003.