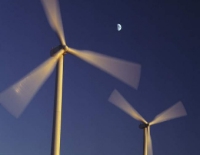 Atlanta, Georgia [RenewableEnergyAccess.com] GE Energy surpassed 5,000 installations for its 1.5-megawatt (MW) wind turbine, largely in the U.S., where the surge of orders is due to the extension of the federal production tax credit at the end of 2005.

“Our 1.5-megawatt wind turbine technology has been proven in nearly every wind regime, terrain or climate worldwide,” said Victor Abate, Vice President-Renewables for GE Energy. “As we celebrate the milestone of our 5000th application, we also continue to invest in technology improvements that build upon the vast experience of our installed fleet and will result in even higher levels of reliability and efficiency.” The first 1.5-MW machine was installed in 1996 in Germany. In 2002, GE gained ownership of the technology as part of its acquisition of Enron’s wind business. Since then, GE has increased its wind engineering team threefold and has applied experience from other business units such as GE Aviation, GE Transportation, GE Oil & Gas, GE Plastics and GE Global Research. GE anticipates that the total of 1.5-MW wind turbines operating worldwide could reach 10,000 by the end of 2008. Accompanying the increase in the number of installations has been a continuing evolution of the company’s turbine technology, which has integrated valuable feedback from long-term plant operation and customer response. Current research and development efforts are further enhancing the 1.5-MW design.