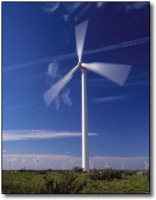 Since entering the global wind energy industry in May 2002, GE Wind Energy has received more than US$2 billion in orders and commitments, the company reported at Windpower 2003, the annual conference of the American Wind Energy Association (AWEA).

Austin, Texas – June 2, 2003 [SolarAccess.com] Commitments totaling over 3000 MW of new wind energy capacity for installation between 2003 and 2005 are split almost evenly between the U.S. and Europe/Asia. In the U.S., 2003 orders and commitments currently provide for 750 new MW of wind-generated electricity – enough to serve the annual electricity needs of over 230,000 average American households. These orders alone represent almost 75 percent more capacity than the total reported by the AWEA to have been installed throughout the U.S. during 2002. In Europe and Asia, the company will supply wind turbines totaling more than 800 MW during 2003, representing an increase of about 40 percent over last year’s installations. “Harnessing the power of the wind for clean energy production is a concept that is gaining tremendous momentum worldwide,” said Steve Zwolinski, president of GE Wind Energy, a unit of GE Power Systems. “With its continuing technology advancements, wind-generated electricity is becoming competitive with other energy options — a key factor in positioning wind power as an increasingly important source of clean energy for the 21st century.” GE’s commitment to its wind division has been demonstrated through a variety of initiatives over the past year. More than 60 new engineers have been added to GE Wind Energy’s staff, and more than 100 GE engineers have been focused on new wind energy initiatives, with new wind turbine reliability and cost-savings targets at the forefront of these efforts. During 2002, GE constructed the first prototype 3.6 MW wind turbine – the world’s first wind turbine over three MW designed expressly for the offshore market to produce commercial power. Earlier this year, the 3.6 MW machine was announced as the “turbine of choice” for several proposed projects, including the proposed Cape Wind project which, if approved, will become America’s first and the world’s largest offshore wind facility. GE’s 2.x series of wind turbines also was unveiled this year. Among the world’s most versatile wind products, the 2.x machines provide three different power classes for optimal generation under a wide variety of wind conditions. New technology was also developed through synergies with other GE businesses. GE’s propriety “Low Voltage Ride-Through” electronics, designed to meet new customer needs, enables wind energy, for the first time, to meet transmission standards similar to those demanded of thermal generators. GE Wind Energy designs and manufactures wind turbines with rated outputs of between 900 and 3,600 kW, and offers support services ranging from project development assistance to operation and maintenance. Worldwide, the company has developed and/or sold over 5,600 wind turbines with a rated capacity exceeding 3,200 MW. GE Wind Energy employs more than 1,700 people with manufacturing facilities in Germany, Spain, the Netherlands and the U.S.