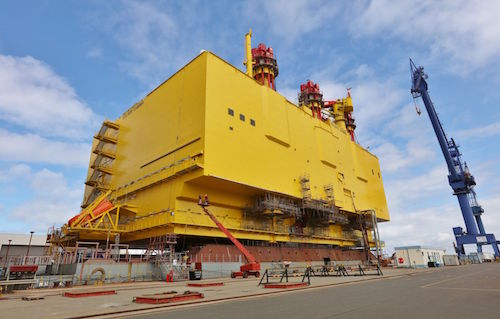 The platform is a key part of the DolWin3 offshore project and will help transmit wind power generated in the North Sea, according to Alf Henryk Wulf, who heads GE’s power unit in Germany, which led construction of the unit. Wulf didn’t want to discuss U.S. President Donald Trump’s decision to quit the Paris accord during an interview at a port in Rostock, Germany, where the 900-MW high-voltage converter was built.

Commissioned by grid builder Tennet Holding BV, Dolwin3 is undergoing final dry-dock tests before being floated around Denmark and into the North Sea. The platform will bundle power from three wind farms next year, transmitting high-voltage direct current onshore, where it can then be reconverted to alternating currents for use in homes.

“As offshore prices fall, the North Sea’s potential for offshore is shining even brighter,” Wulf said. “We all owe it to consumers to engage that potential.”

GE is competing to design and construct another 900 MW connector for Tennet in the German North Sea called Dolwin6, Wulf said. That platform is due to go into operation in 2023. GE has built about 10 converter platforms in the North Sea and Baltic, competing with companies including Siemens AG.

Trump’s decision to pull the plug on the Paris treaty places GE at odds with his administration. Chief executives from some of the U.S.’ biggest companies implored the president not to remain in the Paris accord before Trump made his decision.

“Disappointed with today’s decision on the Paris Agreement,” GE Chief Executive Officer Jeff Immelt wrote via Twitter. “Climate change is real. Industry must now lead and not depend on government.”

Wulf stressed that GE and Siemens are well place to harness the offshore boom, where driving down costs are the key to profitability, because they are the only two companies that make converter platforms and turbines.

Germany, which holds the rotating presidency of the Group of Twenty nations, has sought to keep the U.S. on board the Paris treaty, wooing Trump with projections that a global shift from fossil fuel would create jobs and stimulate economic growth.

Just 1 percent of the North Sea’s offshore potential has been exploited, and billions of euros in future investment will be needed to tap the rest, Siemens said last month. Dong Energy SA and Energie Baden-Wuerrtemberg AG won Germany’s maiden auction of 1.49 GW of offshore power in April offering to build parks free of subsidies.