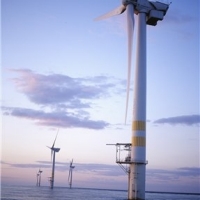 At the core of GE’s European expansion plans is the development of GE’s next generation wind turbine, a 4-megawatt (MW) machine designed for offshore applications. As the largest wind turbine in GE’s fleet, it will incorporate advanced drive train and control technologies gained through GE’s acquisition of ScanWind, said the company.

Direct drive turbines eliminate the need for gearboxes. This technology is already being demonstrated at a test site in Hundhammerfjellet, Norway, where the first ScanWind direct drive unit has been operating for more than five years.

For specific investments in each country, see the company press release.

The European Wind Energy Association expects that Europe’s offshore wind sector will grow more than 70% in 2010,  and forecasts continued growth for the next several years. If all of the offshore wind projects currently in development are completed, they could produce 10% of the European Union’s total electricity.