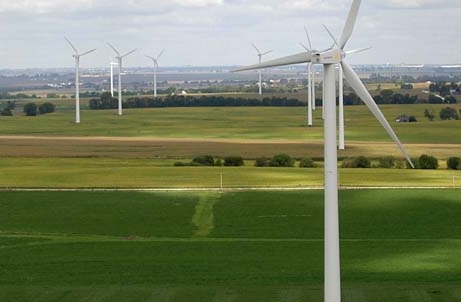 Gamesa Corp. Tecnologica SA cut its 2012 sales forecast and plans to announce a restructuring in October after posting its first half-year loss since the wind-turbine maker initially sold shares in 2000.

Gamesa predicted sales totaling 2,000 megawatts of turbines, compared with a February forecast of 2,800 megawatts to 3,200 megawatts, according to a statement on its website today. The Zamudio-based company had a net loss of 33 million euros ($41 million) in the first six months of 2012, down from a profit of 29 million euros in the same period in 2011.

“There’s been a very, very significant slump in Asia, especially China and India,” Chief Executive Officer Ignacio Martin said today on a conference call. “This means the factory activity we’ll have in the second half will be very low.”

Turbine-makers from Gamesa to the world’s biggest, Vestas Wind Systems A/S of Aarhus, Denmark, are struggling as overcapacity and slowing demand force down turbine prices, which fell to 910,000 euros a megawatt in the second half of 2011, according to Bloomberg New Energy Finance, the lowest since at least 2008 when the London research company began tracking the data.

Gamesa released its earnings after the end of trading in Madrid. The shares rose almost 20 percent today to 1.206 euros. The stock has lost 77 percent of its value in the past year.

Martin, who replaced Jorge Calvet as CEO on May 23, said he’s working on a restructuring plan that Gamesa will announce in October. The company has a manufacturing capacity of about 3,800 megawatts, and needs to lower that to adjust to lower demand, Martin said.

“We are too big,” Martin said. “We have to reduce our size and adjust to lower demand.”

It’s the second time this year that Gamesa has cut its sales forecast. Its February forecast was cut from an initial prediction of 3,000 megawatts to 3,500 megawatts of sales.

Chinese sales dropped to 5 percent of Gamesa’s total in the first half, from 20 percent in the same period of 2011. The Indian proportion fell to 14 percent from 17 percent. The proportion of sales in Latin America more than doubled to 40 percent, and in the U.S. it rose to 25 percent from 15 percent.

Sales of 1.6 billion euros were 27 percent higher than in the first half of last year.