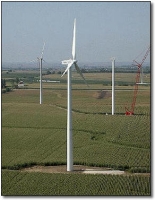 In another example of just how global the wind power industy has become, Spain’s major utitily Gamesa Energia has inaugurated its first wind farm in the United States. The wind farm sited in Lee County, Illinois was constructed in record time by Gamesa’s U.S. subsidiary Mendota Hills LLC.

Minneapolis, Minnesota – April 8, 2004 [SolarAccess.com] The wind farm “Mendota Hills” is equipped with 63 Wind Turbine Generator G52, of 800 kW per unit, for a total wind farm capacity of 50.4 MW. The first Wind Turbine Generators of this facility were connected to the transmission network on November 23, 2003. The president of Gamesa, Alfonso Basagoiti, who took part in the inauguration, said the company will be an active player in “…the new and significant opportunities for the development of the wind power all along the United States.” Basagoiti seized the opportunity to thank all the persons and companies that have contributed to the development, construction and commissioning of the Mendota Hills wind farm, including local and state political representatives, participating landowners, as well as to Commonwealth Edison (ComEd), the utility to which the wind farm sells the electricity. ComEd supplies the metropolitan area of the Chicago City. “The commissioning of this wind farm coincides with a period of growth within the wind power industry in USA,” Basagoiti said. “An industry that I sincerely believe, has a great potential of development.” In Basagoiti’s view, the wind industry’s growth is clearly supported “by the federal and state regulative initiatives that, are helping to the consolidation of this clean energy generation market”. In this way, he trusts that ” at federal and state level, diverse measures will be passed, allowing for a significant increase of wind energy’s contribution to the electric national system.” Mendota Hills’s wind farm is an example of Gamesa’s active presence in the Midwest area of the USA. Besides Illinois, the company is developing projects in Minnesota, Wisconsin, South Dakota, Iowa and other states. All of them are directed and coordinated from its head office in Minneapolis. Additionally, Gamesa Energia is also developing projects in the Southwest region of the country, through its office in Austin (Texas). Currently, Gamesa has in USA nearly 2.000 MW under different phases of development. Upon an extension of the Production Tax Credits (PTC), Gamesa plans to install approximately 200 to 300 MW per year of additional wind energy capacity.