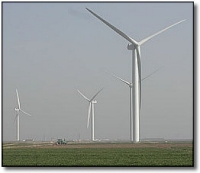 A new 20 MW wind farm is now up and running and connected to the grid in Vendée – Pays de la Loire, France some 45 kilometers south of Nantes, near the Atlantic.

Bouin, France – June 18, 2003 [SolarAccess.com] The Bouin wind farm consists of eight Nordex N80 turbines supplying an approximate total of 45,661 MWh of electricity per year. The turbines are mounted on 60-meter tubular-steel towers. With a rated output of 2.5 MW per machine, this makes Bouin, France’s first wind farm using turbines with a rated output in excess of 2 MW each. For the first five years Nordex will also be responsible for maintenance, service and management of the park. Nordex supplied the park on a complete turnkey basis, including road works, foundations and grid connection, for SIIF Energies, the EDF subsidiary for renewable energy projects. Of the approximately 185 MW so far installed in France, SIIF Energies alone has contributed 88.2 MW. Nordex said France has the potential for major wind power market growth. The principal impetus for extending the use of wind energy in France was provided by the electricity feed-in law passed by the National Assembly in June 2001. According to this law, operators of wind energy systems receive guaranteed reimbursement amounting to 8.38 euro-cents (US$9.8 cents) per kW hour during the first five years; the price for the ten following years decreases when wind speed is higher. At the same time, there are high average wind speeds in France, which ensure a good level of economic efficiency of the French projects, according to Nordex. In other Nordex news, the Supervisory Board and creditor banks support the restructuring program initiated by the company. While the company expects an operating loss during the current financial year, they believe this recent restructuring measures will lead to a marked improvement in earnings in the coming fiscal year. The principal restructuring points are focusing on key markets, reorganizing business processes and making comprehensive cost cuts and most of these measures have already been implemented. In addition to cutting back some 130 jobs and reducing other operating expenditure, the company streamlined its group structure down to two main subsidiaries. As of May 22, 2003, Südwind Energy GmbH has been merged in Nordex Energy GmbH. As the legal successor, Nordex Energy is continuing all the business relations of Südwind Energy, without restriction.