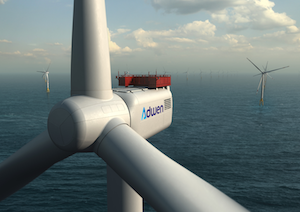 A state of the art test platform is being established at the Fraunhofer Institute for Wind Energy and Energy System Technology in Bremerhaven, northern Germany.

The test platform will feature the first prototype of Adwen’s mammoth 180m rotor diameter AD 8-180 offshore turbine which will be used to varying ends in order to advance the company’s capacity to deliver technical services to wind turbine manufacturers.

A key role for the platform will be in enabling collection of highly accurate measurements that may be compared with field data in pursuit of enhancing testing methods. Such tests, Fraunhofer highlight, play an important function in wind turbine certification processes and risk mitigation.

These aspects of research and development are emphasized by the company as “key for further reducing the costs involved in expanding offshore wind energy.”

Andreas Reuter, Managing Director of Fraunhofer IWES stated: “The test field with the research turbine is the highly valuable completion of our unique testing infrastructure. It empowers us to find solutions for fundamental aspects concerning reliability and grid integration and contributes essentially to the future improvement of very large turbines.”

The new test platform adds to a portfolio of test benches held by Fraunhofer that includes test rigs for rotor blades and nacelles.

The prototype turbine will be located adjacent to Fraunhofer’s existing Dynamic Nacelle Testing Laboratory (DyNaLab), allowing for the turbine, and testing instrumentation embedded into it, to be readily integrated with established infrastructure.

Fraunhofer’s work on developing testing procedures will be undertaken in cooperation with wind turbine OEM, Adwen. Luis Álvarez, General Manager of Adwen stated: “We are very pleased to collaborate with the Fraunhofer IWES in our field tests of our prototype of the AD 8-180. Already, the Fraunhofer IWES DyNaLab has allowed us to exhaustively validate our technology, resulting in great confidence about the optimal performance and reliability of the turbine. In this way we can develop cutting edge technology with minimum risk. That is crucial to continue reducing the cost of offshore wind energy.”

“This new test field is a good addition to Fraunhofer IWES facilities in Bremerhaven and complements perfectly the Dynamic Nacelle Testing Laboratory (DyNaLab). The comparison of field test results with the data obtained in the test rig will enable the optimization of measuring and testing methods and considerably help mitigate the risks of new developments.”

She continued: “The benefits of this are manifold, increasing reliability, quality assurance, reduced time to market and risk mitigation during product development. And all that has a direct impact on what it is our main objective as a company, which is reducing the cost of offshore energy.”

The project has received funding from the Germany Federal Ministry for Economic Affairs and Energy amounting to approximately €18.5 million according to Fraunhofer.

With construction already underway, the company expect that first tests may begin as early as spring.