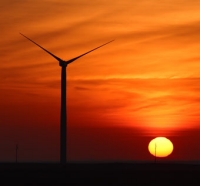 With the assistance of BHE Environmental, a nationally recognized leader in the biology and management of bats, particularly endangered species including the Indiana bat and gray bat, FPL Energy identified 27 potential projects in seven states. During the summer of 2005 FPL Energy began working with BHE Environmental to develop its bat conservation pilot initiative. BHE’s efforts, on behalf of FPL Energy, included contacts with individuals active in bat conservation in more than 30 states. Organizations such as the U.S. Fish and Wildlife Service, the U.S. Forest Service, and state Departments of Natural Resources were contacted about the initiative as well as academicians, private landowners and various non-governmental organizations. Through these contacts a comprehensive list of 27 potential bat conservation projects was developed. The 27 conservation projects went through a rigorous evaluation process prior to selection of projects proposed by the USDA Forest Service and the University of Central Oklahoma. FPL Energy selected two projects submitted in 2005 for funding. The projects are: — The USDA Forest Service, Northeastern Research Station, under the direction of Drs. Mark Ford and Thomas Schuler, will implement silvicultural and prescribed burning treatments near a hibernaculum on the Fernow Experimental Forest in West Virginia to create oak savanna conditions with abundant snags favorable to the local retention of resident male Indiana bats, and to encourage potential female maternity roosting. Use of the area by foraging and roosting Indiana bats as well as the forest’s six other species will be monitored by mist-netting, radio-telemetry and acoustical detection devices. — Dr. William Caire of the University of Central Oklahoma’s Selman Living Laboratory will design and install bat-friendly gates in a hibernaculum supporting more than 70,000 Myotis velifer — Oklahoma’s largest winter population of this species. A temporary gate approximating typical design parameters will be erected and evaluated for effects to bats, before a permanent gate is installed. This project will be implemented over two summers, beginning in 2006, and will involve several teachers and students from a local high school and the University of Central Oklahoma. Dr. Mark Ford, research wildlife biologist, USDA Forest Service, said, “This award from FPL Energy will be instrumental in allowing us to initiate new and novel forest management research on the Fernow Experimental Forest. We plan to use prescribed fire and silvicultural manipulations to maintain, restore or enhance oak-dominated stands to increase their value for bats and other wildlife species. This is an exciting first-step for a long-term adaptive management study that holds great application for the public and private land manager alike in Eastern forested landscapes.” In addition to the bat conservation initiative, the company continues to financially support research activities to better understand bats and wind turbine interaction. “Although the impact of wind turbines on the environment is minimal, we need to better understand the impact of wind energy on bats and look for creative ways to mitigate it,” said Bryan Fennell, vice president, business management, for FPL Energy. “Bat conservation is another promising area, in addition to ongoing research, that needs to be explored by the wind industry.”