Less than three years after the disaster at a nuclear power plant in Fukushima, a hotly-anticipated floating offshore wind turbine began operating 20 kilometres from the damaged site on Monday.

A number of news organisations reported that Yuhei Sato, governor of Fukushima, said that the floating turbine could become a symbol of the region’s desire to become a green energy centre. 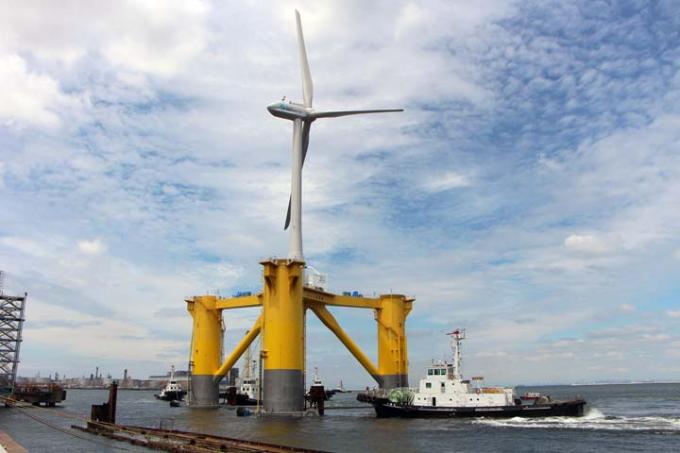 “Fukushima is making a stride toward the future step by step,” Bloomberg quoted Sato saying at a ceremony marking the project’s initiation. “Floating offshore wind is a symbol of such a future.”

The experimental project is funded by the government and led by Marubeni Corp. It requires approval from local fishermen before becoming a commercial operation. The 2-megawatt turbine from Hitachi Ltd. was nicknamed “Fukushima Mirai,” the Bloomberg report said, adding a floating substation has also been set up and bears the name “Fukushima Kizuna.” Mirai means future, while kizuna translates as ties.

Two more turbines by Mitsubishi Heavy Industries Ltd., with 7 MW of capacity each, are expected to also be installed. Bloomberg noted the Ministry of Economy, Trade and Industry has said the floating offshore capacity may be expanded to 1,000 MW.

“For Japan, which is surrounded by deep oceans, floating wind turbines hold the promise of opening up large areas to produce clean energy,” the Bloomberg story added. “The technology involves attaching turbines to structures that float in areas too deep for traditional towers fixed to the seafloor.”

The Associated Press reported that Kazuyoshi Akaba, a vice minister of economy, trade and industry, said it is the government’s mission to ensure the project is successful.

“Many people were victimised and hurt by the accident at the Fukushima Dai-Ichi nuclear power plant, so it is very meaningful to have a new source of energy — renewable energy — based here,” Akaba said.

With continuing problems facing the heavily-damaged nuclear power plant in Fukushima, there’s little doubt that some of the people gathering in Frankfurt next week for EWEA’s Offshore 2013 conference will be discussing Japan’s new offshore wind solution to the nation’s energy conundrum.

This blog was originally published on EWEA and was republished with permission.