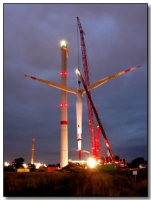 Hamburg, Germany [RenewableEnergyAccess.com] Assembly for a 120-meter (394-feet) high wind tower and turbine isn’t a fast moving process. Germany’s REpower has worked since April of this year on their 5M wind turbine, and recently installed the 120 ton rotor to complete the essential assembly work on the largest wind turbine ever produced to date.

Electrical commissioning work is all that remains to be done. The 5 MW turbine should be providing power to the local grid in Brunsbuttel, where it is located, by the end of the year. It has the capability of generating 17 GW of power a year, which could supply 4,500 people in the region with electricity. “We’re proud of the way our engineers and installers have successfully realized these new dimensions. We have managed to pull off a considerable advantage over our competitors,” said Fritz Vahrenholt, Chairman of the Board. “With our 5M technology, we will be able to produce power at competitive prices, particularly at offshore wind farms.” A team of 20 men assembled the rotor and its 61.5-meter long blades at ground level, and a crane was used to position the rotor on top of the tower. Over the next few weeks, a series of adjustment work and electrical installations will take place as part of the commissioning process of the turbine. All of installed components in the nacelle are protected from external elements by a GRP cowling, and the rotor blades are constructed of a glass and carbon fiber-hybrid fabric that is held together with synthetic resins. REpower states the materials contributed to significant weight reductions for the blades. Each blade is equipped with its own electrical pitch system. The nacelle was designed with a helicopter platform on the roof for ease of access in off shore applications, which the turbine was designed for. During prototype testing, however, the 5M will remain on-shore. Winds as low as 3.5 m/s will disengage the electromagnetic disc brakes and the turbine should have peak performance during winds of 13 m/s. Winds of 25 m/s or more will cause the turbine to cut-out. REpower worked with LM Glasfibre, Offshore Wind Technologie and the Center for Renewable Energy Sources on the 5M project. Funding came from the European Commission’s Energy, Environment and Sustainable Development program; and the European Regional Development Fund through the German state of Schleswig-Holstein.