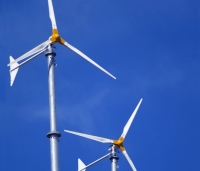 The 2010 launch of Britain’s feed-in tariff program has pushed the country ahead of the U.S. in the installation of small wind turbine capacity in 2011 and the same is expected for 2012.

The remarkable admission is contained in the American Wind Energy Association’s annual report on the status of the small turbine industry in the U.S. for 2011 and in data tracking the performance of the British program.

In total installed small wind capacity, Britain is still well behind the US and China both of which have had various programs promoting small wind for the past two decades. 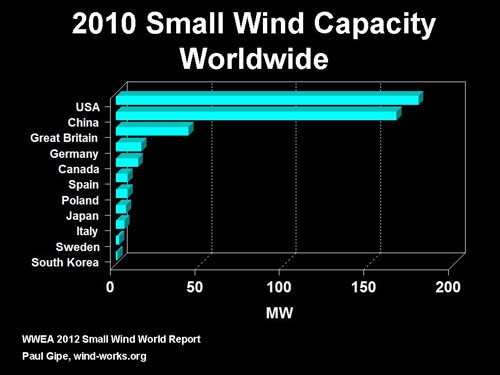 What is startling though, is that Britain surpassed the U.S. — until recently the world’s second largest annual market after China — in new installations and did so with a program barely two years old. This has put Britain’s domestic market on the small wind turbine map for the first time.

The rapid growth of small wind turbines in Britain has been due to the introduction of a system of feed-in tariffs for “microgeneration.”

In contrast, Britain’s microgeneration tariff is predicated on the “cost of generation plus a reasonable profit” model once a universal feature of electric utility rate regulation worldwide. In the British program, utilities simply pay a fixed tariff — or rate — for electricity from microgenerators. They then recover their costs from ratepayers as they do for any other generation.

The tariffs are determined by the Department of Energy and Climate Change (DECC). Thus the “tariffs” or prices paid for generation from small wind turbines in Britain vary by size.

The British program was launched with six “tranches” or size classes. The tranches ranged from micro turbines less than 1.5 kW in size to projects as large as 5 MW. 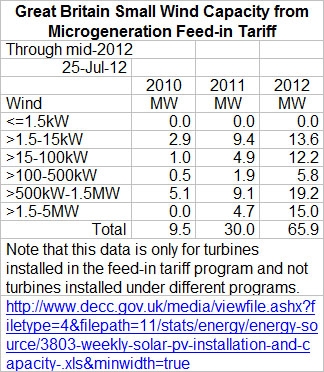 Definitions of what is and is not “small wind” vary worldwide. Most conform to the IEC 61400-2 definition, that is, less than 200 m² of rotor swept area. In practice, this is equivalent to ~50 kW, though in Germany the Bundesverband Windenergie (BWE) uses 75 kW as the demarcation between small wind and all other wind turbines in their annual “market overlook.” Other countries have chosen to limit “small wind” to turbines less than 100 kW in capacity or in some combination of rotor swept area and rated capacity.

Britain’s feed-in tariff program is for what British policymakers call “microgeneration” or generators that fall outside the Renewables Obligation. In the North American context, microgeneration may be more akin to the expression “distributed generation.” These are small plants relative to large, central-station power plants. Consequently, what Britain calls microgenerators may not fit with what others call “small wind turbines.” 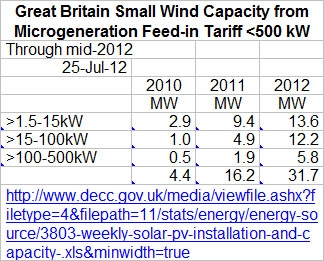 Even using a more traditional definition of “small wind”, annual British installations now rival those in the U.S.

Despite the rapid growth, small wind in Britain still represents only 1 percent of British installed wind capacity of 6,000 MW and only 5 percent of the 1,300 MW total capacity installed under the microgeneration tariffs, predominantly (90 percent) solar photovoltaics.

Continued strong growth of small wind is expected for 2012 but the prospects for 2013 are more uncertain.

Scheduled revisions to the tariffs announced for this winter reduce the number of tranches to four by collapsing the first three tranches into one. This effectively ends the “cost of generation plus a reasonable profit” model in these size categories for a more politically palatable rate.

The original British small wind tariffs had been among the highest in the world, paying as much as $0.50/kWh for 20-years of generation from turbines less than 1.5 kW in size. However, turbines in the multi-megawatt class received only $0.07/kWh, less than similar size turbines in Germany or France.

Growth of the British market relative to that in the U.S. is expected to remain robust until the new reduced tariffs go into effect at the end of the year.

At Renewables UK’s small wind conference this spring in Glasgow, chief executive of Canadian manufacturer Endurance Glenn Johnson said that Britain was the firm’s “largest market by a wide margin.” He added that the conference was “debating about what’s right [price or new FIT tariffs) but without them we’d have nothing.”

Several manufacturers have made significant commitments to the British market based on the country’s FIT policy and the burgeoning market.

Gaia relocated its turbine assembly from Denmark, its longtime home, to Glasgow to be nearer its most important market. This year Gaia expects to install as many as 350 of its 13-meter diameter (11 kW) machine, 80 percent of them in Britain.

Similarly, Endurance expects explosive growth this year in the British market with its 19.2 meter (35-50 kW) turbine.

Endurance and Northern Power will be less affected by the tariff cuts than Gaia as their turbines fall into the mid-size tranches.

Changes in the tariffs will not likely affect Kiwi company Windflow either. Windflow has yet to establish much of a market presence with its 500-kW turbine in Britain. Ironically, the New Zealand firm’s two-blade design is a derivative of that by former British manufacturer Wind Energy Group (WEG) in the 1990s.

Small wind in Britain also qualifies for the “export tariff” that is equivalent to $0.06/kWh. Both factors could make or break financing a small wind project.

China and the U.S. will continue to dominate total installed capacity of small wind turbines worldwide for some time to come. But Britain, because of its innovative feed-in tariff policy, can play an increasing role in the small wind industry globally if the nation can maintain the momentum gained in its domestic market during the past two years.