Initially nine firms were pre-approved to participate in the auction, but ultimately only three companies did: Deepwater, Sea Breeze Energy, and U.S. Wind. The sale lasted 11 rounds before Deepwater was deemed the winner with a combined bid of $3,838,288 for the two parcels.

These areas now held by Deepwater Wind to develop for offshore wind projects span more than 164,000 acres off the coast of Rhode Island and Massachusetts, with combined potential of nearly 3.4 GW of wind generation. It’s actually two leases, a “North Lease Area” of 97,500 acres, and a “South Lease Area” with about 67,250 acres. 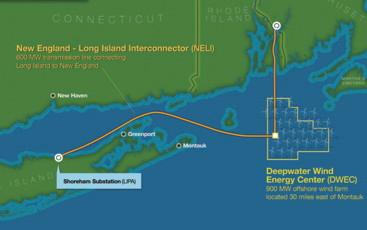 “This is the best site for offshore wind in the United States, bar none,” stated Deepwater Wind CEO Jeffrey Grybowski. “This is an enormous step forward for the industry.”

Helping Deepwater’s case was its existing joint development agreement with the state of Rhode Island. The firm already is developing a 30-MW wind farm about three miles off Block Island, Rhode Island, hoped to be in service by 2015 in a race with Cape Wind to be the nation’s first operating offshore wind farm.

And now the company has both federal as well as state approval for its proposed Deepwater Wind Energy Center (DWEC), 150-200 turbines with combined 1-GW nameplate capacity located 20-25 miles from land (no closer than 13 miles to shore) and “virtually invisible from shore,” according to the company. DWEC plans include a regional transmission system linking Long Island to southeastern New England. That’s more than twice the size of the long-anticipated Cape Wind offshore wind project, which is still lining up investors but expects to finally begin construction by the end of this year.

After a 30-day antitrust review of the auction, Deepwater will have 10 days to sign and return the leasing form, file for financial assurance, and pay the balance of its bid (minus an up-front $900,000 deposit), and then six months to submit a site assessment plan to the BOEM. Once that’s approved Deepwater will have roughly four years to submit a detailed plan to build and operate the wind project with a 25-year operational lifetime; right now the firm projects construction could begin as early as 2017, with commercial operations by 2018. Deepwater Wind will pay $500,000 in annual rent until a wind farm is operational on the site; after that it will pay an annual royalty based on the value of the energy produced.

The BOEM will host a second competitive lease sale for offshore wind on Sept. 4, targeting about 112,000 acres off the Virginia coast. More auctions for offshore parcels along the East Coast are planned for later this year and into 2014.