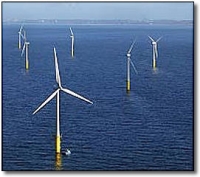 Britain plugged in to its vast natural wind power potential with the launch of the country’s first major offshore wind farm, off the North Wales coast. National Wind Power’s North Hoyle Offshore Wind Farm was officially switched on last week, starting to generate clean, green electricity for some 50,000 homes across the country, just three months after the first turbine was erected.

North Wales, England – November 25, 2003 [SolarAccess.com] The pioneering development, comprised of 30 Vestas V80 machines, has been built 4 – 5 miles off the coast of Rhyl and Prestatyn and will generate enough clean electricity for up to 50,000 homes each year. Backed by Tony Blair and environmental group Greenpeace, the wind farm has been developed by National Wind Power (NWP), sister company to npower, who supplies renewable energy to more UK households than anyone else. In a unique partnership, NWP’s sister company, npower, and Greenpeace, have developed npower Juice, a clean electricity product available to domestic customers at no extra cost. Once fully operational, North Hoyle will become the sole source of npower Juice. Householders signed up to npower Juice notice no difference in the electricity they receive but know that the electricity they are paying for is generated from a renewable source. “Rolling out this first large-scale offshore wind venture is a highly significant step towards achieving Britain’s renewables goal,” said Prime Minister Tony Blair. “We are on our way to a future that can be transformed by the use of clean forms of energy. I look forward to celebrating further successes with you along the way.” Built in just eight months, the wind farm will prevent the release of about 160,000 tons of harmful carbon dioxide into the atmosphere every year – which is equivalent to removing some 80,000 cars from our roads.North Hoyle was constructed by a consortium comprising Vestas Celtic Wind Technology and Mayflower Energy, both UK-based companies. Approximately 85 percent of the capital expenditure of North Hoyle has been placed with companies based in the UK. “This is the beginning of mainstream offshore wind power development and the dawn of a new era,” said Stephen Tindale, Executive Director of Greenpeace UK. “Global warming is the greatest threat facing the planet, but the power flowing ashore today demonstrates we have the solutions to tackle it. It’s great news for all our futures.” Energy Minister Stephen Timms added his congratulations, reinforcing Government’s high expectations of the offshore wind sector in meeting the 2010 target that 10 percent of electricity supply should come from renewable sources and commenting on the additional opportunities that this industry will create, namely at least 20,000 new jobs in manufacturing, installation and maintenance. “I want the UK to be a leader in offshore generation, taking advantage of the world beating expertise built up over four decades of offshore activity in the North Sea, and to deliver its industrial potential for the UK economy.” With another 11 offshore wind farms with the necessary consents in place and the next inauguration, of Powergen Renewables’ Scroby Sands, off the coast of Great Yarmouth, due mid-2004, the reality of offshore wind for the UK is becoming more and more tangible.