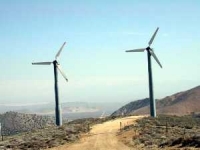 Massachusetts, United States [RenewableEnergyWorld.com] If recycling is green, and wind turbines provide green energy, then how green would it be to recycle the wind turbines themselves? That’s the plan for Aeronautica Windpower, a Massachusetts-based company that is hoping to refurbish and find new homes for hundreds of wind turbines that are being retired from the large wind farms of California.

The company is betting that a large variety of new locations can be found for these 50-500 kilowatt recycled, green-power generators across the rest of the country as they get replaced with larger machines.

According to the company’s industry research, over 10,000 machines that were installed during the mid ‘80s and ‘90s may soon be replaced by larger, more modern turbines. That’s a lot of generation capacity that would otherwise be scrapped.

“While big machines make sense on a wind farm, these ‘mid-scale’ machines are perfect for agriculture, schools, villages and other commercial and industrial applications,” said Brian Kuhn, VP of Marketing for Aeronautica Windpower.

Before choosing to recycle a turbine, the company does its homework, sending a representative to wind power fields that are undergoing “upgrades” to go over and make a decision about each turbine.

“Not all machines can be recycled,” Kuhn said, “because many of the older models were quite troublesome. In many ways the California wind fields were the proving grounds for modern wind turbine designs from around the world,” he said.

The company hopes to give the best machines a second life at harvesting renewable energy for America.

“Some of these machines were built like tanks,” said Aeronautica’s VP of Manufacturing, David Wright, “and like many aircraft and other pieces of equipment, they can be stripped down to the frame and rebuilt, using many newer technologies that were not even available when they were first made” he said.

For instance, Aeronautica plans to install electronics on each machine that will allow them to tie into the Internet in order to report their own service issues and operating statistics.

This month, Aeronautica is receiving its first three turbines for refurbishing and has a number of machines already under contract.

While shipping large turbines from California to Massachusetts is costly, the company said that even with transportation costs, the overall sales cost for a refurbished turbine — ranging from US $80,000 to 120,000 — is still quite low in comparison to the cost of a new turbine. And while all the work is currently being done in the East, the company does have plans to open plants in other locations, such as California.

The founders started the company because they saw a business opportunity. “I personally felt the mid-scale market was being abandoned by turbine manufacturers,” said Kuhn.

The company, which also has plans to introduce its own line of new mid-scale wind turbines and blades, recognizes that recycled machines are only one small niche in the burgeoning wind energy industry, an industry that is currently experiencing a 20% annual growth rates.

“Refurbishing is a prelude into our own blade and turbine designs next year — a stepping stone into the market [while] doing a real service,” said Kuhn.

“There’s still a lot of life left in these machines,” Kuhn said, “and it would be a shame to waste them. In fact, our prices for recycled machines create some of the best economics in the wind business. In many cases the investment in equipment can be recovered in as little as 4-5 years, with free electricity thereafter.”

Aeronautica Windpower is one of the growing number of firms entering the U.S. wind industry. Last year, wind power accounted for more than 25% of the world’s new electrical generation capacity.

“We’re proud to be providing this valuable service,” said Kuhn, “and we expect to be quite busy recycling these ‘green machines’ for several years to come.”