On June 21st, Finavera Wind Energy (TSXV:FVR, OTC:FNVRF) announced the ratification of the sale of its Tumbler Ridge and Meikle wind energy projects to Pattern Energy with 99.63 percent of votes cast in favor (a two-thirds majority was needed).

The result should have surprised no one, given that the sale was essential to Finavera’s liquidity and ability to fund its operations.  After shareholder, stock exchange and regulatory approval, Pattern will forgive C $9.3 million of Finavera’s debt.  Shareholder approval is now complete, exchange approval is  expected this week, and regulatory approval should be complete by early September (see below).  Pattern is also providing a credit facility which will allow Finavera to continue its operations.

The company’s board of directors was also approved, although not with the same 99+ percent of the votes.  Roughly a quarter of the votes for Finavera’s four directors were withheld.  According to Finavera’s CEO Jason Bak in an interview, a large block of the votes withheld from the directors were because one larger shareholder and creditor, Sprott Power Corp., was registering its disapproval that it was not going to have a $900,000 loan repaid sooner.  That loan and Sprott’s two million share stake in Finavera arose last year, when Sprott was considering doing a deal with Finavera, but instead ended up buying assets from Shear Wind, Inc.

Going forward, there are a number of milestones needed to complete the Pattern transaction and to realize the value of Finavera’s stake in the Cloosh Wind Project in Ireland.  If both are completed, most likely in mid- to late 2014, I calculate that Finavera will have between 32 and 44 cents of net cash on hand.  Bak promises a shareholder vote as to the use of this cash: should it be returned to shareholders as a dividend, or used to invest a new opportunity.  The timing of the vote will depend on when Finavera is able to present shareholders with a specific investment opportunity, and will likely precede the completion of the Pattern asset sale.

The next milestones for Finavera will be:

Given the different possibilities, I decided to do a quick scenario analysis of the possible outcomes for Finavera, and look at what that means for Finavera.  To be conservative, I not only considered the two options Bak thinks are likely (Super-Miekle or Meikle and Tumbler) but also considered a couple possibilities which he considers very unlikely.

The results are shown in the chart below: 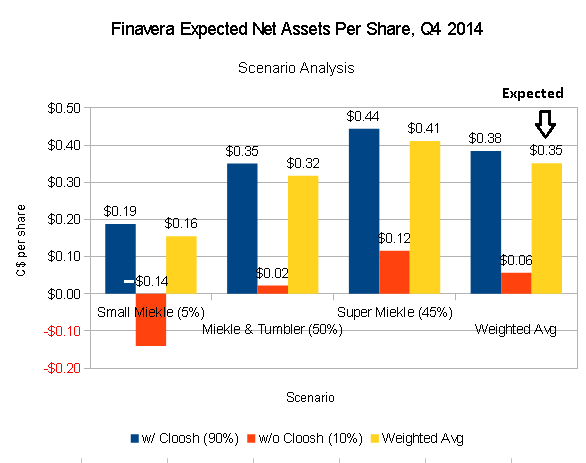 In my calculations, I assumed 37.5 million diluted shares outstanding, C $22.6 million in liabilities, C $2 million in current assets, and C $3 million in operating expenses before Finavera receives the final payment from Pattern.

The positive result from the Annual General and Special Shareholder meeting had begun to lift Finavera off its low, only to be reversed by two days over cratering stock markets on Wednesday and Thursday.  Although there is always considerable risk in small companies like Finavera, even discounting next year’s expected cash holdings of C $0.35 per share by 50 percent gives a value to Finavera today of C $0.175.  Today’s 14 cent share price looks likely to double (or more) over the next 18 months, as Finavera completes the milestones above.

This article was first published on the author’s Forbes blog on June 21st and Alt Energy Stocks and was republished with permission.