More
Home Wind Power What Happens When the Incentives Expire?

Sacramento, CA, USA — Wind projects, along with other renewable energy technologies, have benefitted in a variety of ways from federal incentive programs. The Section 1603 cash grant program, the Department of Energy Section 1705 Loan Guarantee program and the Bonus Depreciation schedule are among the federal programs that are scheduled to expire by the end of 2012. The Production Tax Credit (PTC) and Investment Tax Credit (ITC) are also scheduled to expire for wind projects at the end of 2012. In today’s budget-cutting environment, it’s possible that none of these incentives will be renewed.

The Section 1603 cash grant has been a popular and successful program and is generally credited for keeping the U.S. wind industry healthy during the 2009-2010 recession1. Since the program was initiated in 2009 through the first quarter of 2011, $5.6 billion in cash grants has been awarded for wind projects, representing more than 80 percent of all Section 1603 funding to date.

The DOE Section 1705 loan guarantee program has a current allocation of $2.5 billion that can support up to $30 billion of loan guarantees. As of April 2011, three wind plants have received commitments for loan guarantees totaling $1.5 billion, including $1.3 billion for Caithness’s 845 MW Shepherd’s Flat project. 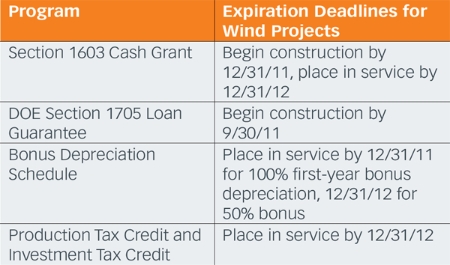 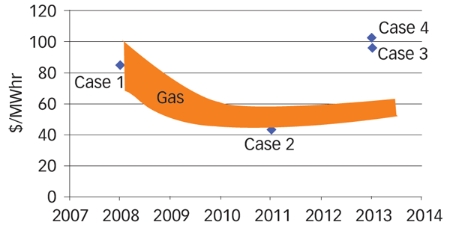 Under the federal Modified Accelerated Cost-Recovery System (MACRS), wind and other renewable energy properties are classified as five-year property for depreciation purposes. Eligible property placed in service after Sept. 8, 2010 and before Jan. 1, 2012 qualifies for 100 percent first-year bonus depreciation, meaning that 100 percent of the project cost can be expensed in the first year. For 2012, a 50 percent bonus depreciation is still available. After Dec. 31, 2012, the allowable deduction reverts to the original five-year MACRS recovery. The value of the 100 percent bonus is estimated to be 40 percent of the value of the Section 1603 cash grant.

To determine the impact of the pending expiration of these programs, Navigant calculated the Levelized Cost of Energy (LCOE) for a 100 MW wind plant in various time frames with the following project finance structures:

Navigant also calculated the range of LCOE prices from natural gas fired power plants during these same time periods.6 The results of the four cases are shown in the graph.

The case studies show that wind plants are competitive with gas plants in Cases 1 and 2, which is consistent with the fact that many utilities have installed wind plants well in excess of their Renewable Portfolio Standard (RPS) requirements. In comparing Cases 1 and 2, the combined effect of the cash grant and the DOE loan guarantee cuts the cost of a wind farm nearly in half. In comparing Cases 1 and 3, increased return requirements from tax equity investors are a significant factor in driving wind LCOEs higher. In comparing the wind plant LCOEs of Cases 3 and 4 with their corresponding gas plant LCOEs, wind will not be competitive with gas in 2013, either with or without the PTC. Plenty of wind plants will still be built, but with the current cost structures in place and unless federal incentives are renewed or replaced, post-2012 U.S. wind markets will be driven primarily by RPS requirements rather than competing head-to-head with gas projects.

1. According to the DOE’s Preliminary Evaluation of the Impact of the Section 1603 Treasury Grant Program on Renewable Energy Deployment in 2009 (Bolinger, Wiser, and Darghouth, April 2010), the grant program may have helped directly motivate as much as 2,400 MW of wind capacity to be built that would not otherwise have come online in 2009.

2. Case 1 assumes a 6% annual return for tax equity investors, which was typical in 2008 when there were plenty of investors compared to the number of quality projects. The wind plant capital cost is assumed to be $2,000/kW for all cases.