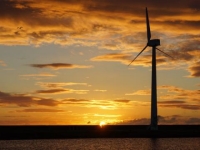 Over the past decade, the wind industry has been the U.S. poster child for scalable renewable energy development. In the fourth quarter of 2012 alone, the U.S. added a record-breaking 8.38 GW of wind turbines, surpassing 60 GW of total installed capacity. To put this in perspective, the newly installed wind projects in that single, three-month period:

Moreover, best-in-class wind resources are now cheaper and less volatile than natural gas, even with little to no state renewable incentives, as evidenced by recent pro-wind utility actions in Colorado and Alabama.

The precipitous drop in wind development in 2013 was due to an anticipated change in federal policy. Since 1992, wind power has received federal subsidies through the Production Tax Credit (PTC), which provides a tax credit to wind farm owners for every MWh of power generated. The PTC was envisioned as a policy action to support a nascent industry, so it has always been passed with a specific cut-off date.

However, whenever the PTC expired in the past, Congress ultimately reinstated it. These on-off policy changes generated incredible volatility in the market. Looking at the chart below, the PTC expiry effects in 2000, 2002, and 2004 are quite obvious. Each time, developers raced to finish installations before the deadline, cancelled their projects, or delayed construction in hopes of the PTC’s reinstatement. In 2010, although the PTC was extended before it expired, the mere threat of the subsidy ending caused new installations to fall 43 percent. The most recent crash in 2013 was just another example of a pattern that has played out many times before.

Oddly, there will likely be a spike in wind development in 2014 based on the PTC’s availability in 2013. Project financiers that invested more than five percent of the capital required for projects prior to December 31, 2013 continue to qualify for the PTC under a “safe harbor” clause. Project full financings utilizing the PTC under this safe harbor condition may actually extend into 2015 and beyond.

Why the PTC Leads to Industry Disruption

The boom-bust nature of the wind industry, which undoubtedly connects to uncertain federal policy, greatly increases each company’s risk. Higher risk increases financing and borrowing costs for development and equipment manufacturing companies, driving potentially profitable projects into the red and stifling investment. To make matters worse, inconsistent policy can incentivize developers to delay projects in order to wait until the PTC is reinstated, further exacerbating demand fluctuations. But these fluctuations aren’t just bad for business; they are also bad for people.

In 2012, a leading turbine manufacturer closed several U.S. plants and laid off hundreds of workers in anticipation of the PTC’s expiration. Overall, American Wind Energy Association (AWEA) reports suggest that roughly 5,000 U.S. manufacturing jobs were lost between December 2011 and December 2012. Repercussions from uncertain federal policy continued to impact the industry in 2013 despite the PTC’s last-minute extension. This past June, Nordex USA closed a turbine plant in Arkansas, citing “continued uncertainty and instability of the U.S. market.” These fits and starts wreak havoc across communities, create perverse incentives for developers, and distract the industry from its core business. This volatility is now likely to continue, as just last month Congress allowed the PTC to expire again.

RMI has always promoted market-based solutions to solve our energy problems. And yes, markets go up and down, sometimes violently, but are generally not all-or-nothing propositions like the existence or disappearance of the PTC. And markets often allow for pricing efficiency in contracting and even protective trading (e.g., options) when futures markets prevail.

So what to do with the PTC? There is no question that we need to migrate over time to a value-based market solution. However, we first need to level the playing field to do so. The PTC has been effectively scrapped via expiry, while natural gas, wind’s primary competitor, still gets lavished by subsidies. The three primary ones are 1) expensing “intangible” gas drilling costs (effectively allowing for immediate depreciation of what would otherwise be considered capital expenses with normal depreciation), 2) the Section 199 domestic manufacturing tax deduction, and 3) a percentage depletion (a special depreciation of sorts for depleted reserves) for gas wellheads. Furthermore, Master Limited Partnerships (MLPs), an entity structure that allows many natural gas pipelines to pay no corporate tax, aren’t available to wind projects. Eliminating the PTC while keeping tax breaks for natural gas hardly makes for an even playing field, so it’s understandable why the wind industry is pushing to keep the PTC.

If we do scrap the gas tax breaks there are certain things that need to happen to create a market-based solution. First, public utility commissions need support to better understand the fuel price hedge value that wind offers. Looking at the near term (roughly three years out), RMI offered some comparisons of utility fuel commodity hedging budgets and how those should be compared to the value of fixed wind power in a 2012 whitepaper. Lawrence Berkeley National Laboratory followed up with a 2013 paper hitting on similar notes, showing that from 2009 to 2013 natural gas prices could rise two to ten times their current cost (an implied volatility of 2:1 to 10:1 toward more expensive natural gas). Right now, perhaps due to the recent 60 percent spike in Henry Hub natural gas pricing eating up a lot of potential upside volatility, the implied volatility ratio seems to be closer to 1:1. So the near-term hedge value is not always big, and can in fact go negative, but should be priced and almost never is.

However, wind PPAs are often 20 years or longer, so the first three years of natural gas futures market volatility are a pretty small piece of the wind hedge value. Looking just three years out only quantifies the hedge value for 15 percent of the wind PPA life. The hedge value of the other 85 percent matters more! It would be great to see prominent banks with energy trading desks work with the renewable energy industry for price transparency for natural gas options further out than three years.

Also, more has been written about valuing the impact of greenhouse gas emissions — for example, through a carbon price — than would fill an Olympic-sized swimming pool. So we’re not going to dwell on it here, other than to state “price it already!” If it can’t be done through federal regulatory determination (which is up to the EPA) or federal legislation, then perhaps it should fall to state legislatures (as occurred in California) or even PUCs.

Distributed energy resources are discussed in terms of resilience, the ability of the grid to withstand severe events, whether storms, physical attack, or another threat. While wind farms usually tie in at the transmission level, they are generally more “distributed” than central, large power plants, being more geographically scattered and smaller per “plant” (per wind farm). While the grid infrastructure to maximize the resilience potential of wind farms may not be instituted in most locales, that potential is real, and it too should be granted quantitative, market-based value.

Getting Off the PTC Seesaw

The PTC, which is typically monetized by a small cabal of tax equity investors, seems far from the perfect incentive vehicle. However, in the absence of a price on carbon, recognition of hedge value in energy markets and by public utility commissions, and the creation of a market around resilience, the wind industry is left without market weapons to level the playing field against its competitors’ governmental largesse. Yet the wind industry may be better off pursuing these market solutions and hammering against the tax breaks of its competitor considering the massive swings in fortune it has experienced under the PTC’s tenure. In other words, it may be time to adapt and overcome, rather than to repeat past mistakes.