Italian wind generation has fallen behind electricity generation from solar photovoltaics for the first time in an industrialized country. Italy uses feed-in tariffs to pay for solar energy instead of a trading system in green certificates, one of the hallmarks of a quota system.

Great Britain, which also uses a quota system for large-scale wind energy and has the best wind resources in Europe, pays 20% more for wind energy than Germany: €0.108/kWh ($0.135/kWh). More than half of German wind capacity is now installed in lower wind areas of mid-Germany and yet Germany still pays less than Great Britain for wind energy. 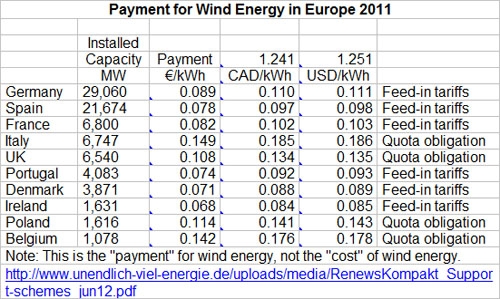 Britain’s ruling conservative coalition has proposed replacing its quota system, the Renewables Obligation, with Contracts-for-Differences in a bid to move closer toward feed-in tariffs. However, there are few details on what the government would actually pay under its proposal, in part, because of controversy over how much it would cost to pay for nuclear power.

Twenty of the 27 member states in the European Union (EU) use a form of feed-in tariffs and much of the wind, solar, and biogas in the EU has been developed using feed-in tariffs.

The German Renewable Energy Agency also notes that feed-in tariffs are a market mechanism that can be used to implement “renewable energy” policies because they can be tailored to individual technologies.

In theory quota systems only reward the “cheapest” technology and, thus, doesn’t “pick winners” as such. In Europe this is wind energy. Though this model is supposed to deliver the lowest-cost electricity to consumers, ironically it delivers the most expensive wind energy in Europe according to the Renewable Energy Agency.

Italy and Great Britain have each developed less than 7,000 MW of wind energy. 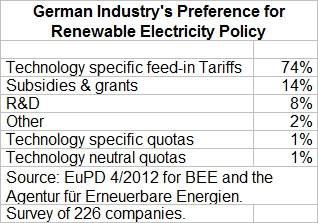 In a survey of German industry, says the agency, the overwhelming majority favor technology-specific feed-in tariffs. Only 2% prefer a quota model as used in Poland, Belgium, Great Britain, and Italy.