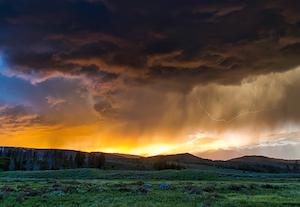 The 2017 Atlantic Ocean hurricane season racked up a record $306 billion in damages and aid, making it the costliest hurricane season ever, according to the National Oceanic and Atmospheric Administration. This reality is the latest piece of evidence that extreme weather is wreaking havoc around the world, with increasing frequency and severity.

Here’s a question for leaders of corporations and municipalities: What was the impact of extreme weather on your bottom line last year? And how are you mitigating this threat to your company’s operations and finances in the future?

As we recently recognized the 48th annual Earth Day, these questions are timely. Increases in coastal flooding, more frequent and powerful storms, wildfires, and other extreme weather events continue to dominate the news, and are a source of ongoing concern among scientists, citizens and lawmakers…and the concern should be shared by businesses, countries and cities worldwide.

Organizational leaders, here’s how extreme weather is likely impacting your organization’s operations and costing you money, today or in the near future:

As extreme weather and flooding events continue to occur, businesses and municipalities pay more to insure against them. According to Insurance Journal, businesses that have experienced “coastal natural catastrophes” can expect insurance rate increases of up to 20 percent.

Here is what we picture most when it comes to floods, rising seas and extreme weather: downed power lines, scorched property, wrecked buildings, submerged vehicles, closed roads, and empty city streets. The New York Times reported that in 2017 there were 16 events that caused more than $1 billion each in damages and aid.

Hurricanes, floods and other events can disrupt day-to-day operations for months, causing loss of revenue, loss of productivity, underutilized assets and rippling supply chain delays for businesses. The same can even happen to companies outside an impacted region. This problem has been cascading recently. For example, Dow Jones reported that research by Zurich Insurance and the Business Continuity Institute showed that supply chain disruptions due to extreme weather increased 29 percent between 2012 and 2017.

So what are corporate, municipal and political leaders to do? Let’s start by examining what may be causing the increasing frequency of extreme weather.

According to numerous sources, an increase in carbon in the atmosphere is trapping heat near the Earth’s surface, causing temperatures to rise, and weather patterns and norms to change. Evidence points to human activity as the significant source of this carbon, and the situation is expected to get worse in the coming decades. Perhaps changes in human activity — led by policy changes implemented by the leaders of companies and local governments, and that are motivated by cut-and-dried economic factors — can reverse this trend.

In this new reality of more severe weather, and its parallel negative impact to the finances of businesses and municipalities, practicing sustainability to shrink a carbon footprint is more than just a socially responsible thing to do — it can actually improve your bottom line. Think of “going green” as a long-term strategy to actually reduce costs and save money. How?

Reducing your organization’s emissions reduces the amount of carbon being put in the air. As more and more organizations find ways to reduce emissions, it will have a positive cumulative impact on the environment: Less carbon, less atmospheric heat, less extreme weather, less unforeseen costs from extreme weather for companies.

Carbon taxes are also another impending possibility in the U.S., and one that proactive sustainability programs could potentially protect businesses from. Taking a page out of Canada’s playbook, New York and California have made significant momentum towards adopting carbon tax policies, with California also incorporating a cap-and-trade program, designed to reward environmentally responsible practices, since 2012. As more states consider regulating carbon emissions more aggressively, taking proactive steps to reduce your carbon footprint now can help you avoid taxes later.

So, what can you do to reduce your organization’s carbon footprint? Start by changing the way your organization views investments in sustainable initiatives. It’s no longer just about ‘being green’ — it’s about addressing the biggest contributors to CO2 emissions now to ensure more stable operations and a better financial future. As reported by the Harvard Business Review, PepsiCo offers a helpful case study for strategically implementing a sustainability plan to ultimately improve the company’s operations and bottom line. Here are a few popular options to consider:

Electricity production (largely for commercial facilities and private homes) accounts for the biggest percentage of human-generated carbon emissions — 28 percent, according to EPA data. Choose solar, wind, geothermal, or another alternative energy source to move away from more polluting fossil fuels.

Besides reducing emissions, choosing greener electricity supply can improve local economies by creating jobs. According to National Geographic, doubling the current share of renewable energy, at the expense of coal-fired plants, has the potential to create half a million new jobs.

Therefore, a company or municipality can make a big climate impact by switching its commercial fleet from fossil-fuel-burning engines to more hybrid, plug-in hybrid and electric vehicles. And with gasoline prices rising to their highest level in years, the economics of electrified commercial vehicles, particularly hybrid-electrics, make sense.

There is another benefit that’s also very real: Adopters of cleaner energy solutions see increased interest in their products from environmentally conscious consumers. According to research by Natural Marketing Institute Solutions, 54 percent of Millennials and 45 percent of Generation X consumers “considered the environmental impact of products when making purchasing decisions.”

In a world of increasing options to mitigate corporate and municipal risks from extreme weather, remember this: reducing your carbon footprint is not just a smart policy for our planet; it’s a smart and sustainable opportunity for your organization.