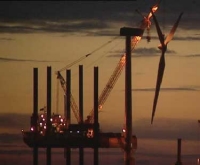 Milan, Italy [RenewableEnergyAccess.com] Wind power could generate up to 16% of Europe’s electricity by 2020. This was the message delegates heard at the opening of the European Wind Energy Conference (EWEC) in Milan, Italy, yesterday.

Presenting figures to show that approximately one-third of new generating capacity installed in Europe between 2002 and 2006 was wind power, Arthouros Zervos, president of the European Wind Energy Association (EWEA), noted that a crucial factor in this increase was the expansion of the market outside Germany, Spain and Denmark. “Today Europe has 50,000 MW of installed wind capacity. In an average wind year this produces approximately 100 TWh of electricity, equal to 3.3% of total EU electricity consumption. If we reach 180 GW by 2020, this will produce more than 500 TWh of electricity a year which represents a five fold increase compared to today’s production,” said Zervos during the opening session of EWEC 2007. Organized by EWEA, the four-day conference is expecting more than 3,000 attendees this week at the Milano Convention Centre. With 500-plus presentations designed to analyze and debate the steps required for meeting a large part of European electricity needs by wind power, EWEC 2007 sessions will explore how to create stable political frameworks; upgrade existing power infrastructure to incorporate wind energy; take steps to continue cost reductions; increase offshore wind production; and intensify research, innovation and technological progress in the wind sector. The conference will also discuss ways to lighten the legislative barriers and increase public awareness. Fabrizio Fabbri, Head of the Technology Secretariat at the Italian Ministry of the Environment — representing the Environment Minister Alfonso Pecoraro Scanio — raised the issue of public acceptance yesterday as one of the main challenges for Italy. “If we want to achieve the European target, it is crucial to persuade people that we strongly need wind energy” said Fabbri. This isn’t the first time issues of public acceptance have been discussed among the European Union (EU) Members this year. In March, energy policy and climate protection topped the agenda at the Spring Council in Brussels where EU heads of state and government committed to a binding target for 20% renewables by 2020. Mechtild Rothe, vice-president of the European Parliament, said yesterday that the new 20% target had to be translated into national action plans, giving specific binding targets for electricity, transport and heating and cooling. She called on the European Commission for fast and balanced negotiations with each of the 27 Member States in the EU. “The sharing of the 20% target must be really European. Every country has a huge potential. I have not heard of any country in the world where the wind doesn’t blow or the sun doesn’t shine,” said Rothe at EWEC 2007. “It is not acceptable that some member states still argue that renewables are only for rich countries.” Fabrizio Barbaso, Deputy Director General of the European Commission, stated that a new legal framework for renewable energy would be proposed in the autumn, after having negotiated national plans with every member state. “We want national targets per sector and we want the efforts and the opportunities to be shared between the 27 countries. The Commission will then monitor very closely the progress made by every country,” he said. “There is no doubt that renewable energy and energy efficiency will be the cornerstones of future EU energy policy, and wind energy is one of its main components.” Along with the approximately 40 sessions, an Exhibition is being held in conjunction with the conference that features over 200 companies involved in the wind energy sector. In addition, the Global Wind Energy Council (GWEC), in cooperation with the Chinese Wind Energy Industries Association, hosted a special workshop today that provided an overview of the Chinese market, including regulatory and legal developments. Shi Lishan, Director of Renewable Energy at the Chinese Energy Bureau, who is leading an 80 person delegation to the conference, said that China was now following the European lead with a target for 10% renewables by 2010 and 16% by 2020.