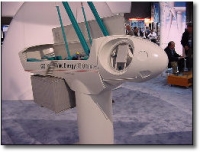 They say everything is bigger in Texas, and if there’s one way to sum up the direction that wind technology is taking – it’s getting big. Really big.

Austin, Texas – May 21, 2003 [SolarAccess.com] The signs of this growth in both industry and the technology were quite clear at the American Wind Energy Association’s (AWEA) WindEnergy 2003 trade show in Austin. The trade show itself has grown to reflect the changing size of the industry. Over 2,150 people had pre-registered for the conference as of last week, compared to 1,400 last year, a 54 percent increase, according to AWEA. Wind power technology, which has been refined to an exact science, is moving in the direction of massive multi-megawatt wind turbines. While small wind turbines from such companies as Bergey Wind Power, and SouthWest Wind Power, are still a vibrant part of the industry, it’s the large industrial wind turbines that are driving the market. “The bottom line is that turbines are getting bigger and bigger,” said Gary Hanspal, VP of Operations for Beaird Industries, a manufacturer of turbine towers. “The real technological advances that are driving the industry are these new turbines.” What this means for Beaird is bigger and more complex towers which must be designed to handle the serious stresses of these larger units. “It’s not just a pole,” Hanspal said. “It has to be designed for earthquake loading, wind loading, and the constant vibrations of operation.” The largest of their towers are 65 meters tall and weigh in at over 100 tons. At these sizes, transportation becomes a serious issue – so much in fact that Hanspal said it’s shielding the American tower industry from foreign competition. “Transportation cost is a barrier,” Hanspal said. ” It’s what’s protecting the U.S. industry from competition. For someone to build a tower in China or Korea for use in the states is just cost prohibitive.” Someone who knows all about the challenges of the increasingly large turbines is Tom James, of the Fort Worth, Texas-based LoneStar transport which specializes in large industrial transportation. “It’s a real challenge to get the bigger components to remote sites, and these projects are all getting bigger and are focused on bringing in these larger generators,” James said. On display at LoneStar’s booth was a scaled down replica of a their larger transport vehicles which was a tractor trailer truck coming in at close to 200 feet long with a tower’s bottom section as the load. The gross weight was over 200,000 lbs. Although wind projects are often among their more visible projects, Lonestar’s business is only 10 percent wind projects. Nevertheless, when they’re needed, the wind equipment poses significant challenges. “The industry is so new, there’s not that much equipment out there that can deal with these needs,” James said. “Change is driven by what the industry wants, and the transportation has to adapt.” Tom Gray of AWEA sees the same trend toward larger technology. While the benefits of economies of scale often include improved economics and greater penetration into the traditional electrical grid, it still poses logistical challenges. “We’re running up against transportation limits, and we’re already pushing the limits with the two MW units,” Gray said. There’s even been some talk about creating means for on-site manufacturing where large components such as the blades would be constructed on-site, Gray said. Hugo Carver of California-based Knight Carver is a wind turbine blade manufacturer. For the time being Carver is focused on smaller blades that don’t pose the most transportation challenges, but he too sees where things are going. “It’s the same old trend that we’ve seen, the technology keeps moving toward larger and larger machines,” Carver said. As turbines get larger and demand longer and stronger blades, the demands on the materials for their production inevitably rise. While fiberglass materials for average size blades might cost US$1 per pound, the high tech aerospace materials which are more appropriate for the demands of larger blades can run as much as US$75 a lb, said Carver. An emerging trend which Ryan Pletke of Black and Veatch’s recently launched renewables division noticed is increasing opposition to wind energy projects. He doesn’t feel the opposition fairly represents an aggregate of public opinion but more often is the result of a very vocal, well-funded, and politically connected minority. He cited particularly abrasive opposition to Cape Wind’s proposal for a wind farm in Nantucket Sound as a certain example. There’s a feeling coursing through the industry however, that the U.S. market could experience a boom time, if it’s granted the proper legislative signals from the U.S. government. Pletke noticed that within recent years many companies involved in the wind industry are seeking manufacturing locations in the U.S. where they might be more strategically poised to take advantage of an anticipated Renewable Energy boom. Whether the boom is likely to happen and when, is of course anybody’s guess. But what’s clear is the industry is moving toward economies of scale that could put a serious dent in the energy production monopoly that fossil fuels currently enjoy. Jesse Broehl is in Austin, Texas covering Wind Energy 2003. Check SolarAccess.com for daily updates. He can be reached at jesse.broehl@solaraccess.com