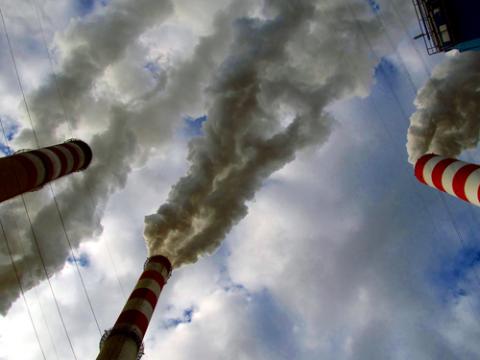 LONDON — The European Union is poised to take its first formal steps to expand the world’s most ambitious limits on fossil fuel pollution. That may widen a rift in how it balances green policies with the need for cheaper power.

The 28-nation bloc’s regulatory arm is considering a proposal that would slash carbon emissions by 35 percent or 40 percent by 2030, deepening a target that expires in six years, according to a draft of the plan seen before its official release tomorrow in Brussels.

The document will be the starting gun for a debate on the EU’s biggest change in energy policies in more than six years. It will pit countries such as Germany and the U.K. that want to step up efforts to protect the atmosphere against Poland and its allies, which are working to cap electricity costs that in some parts of the region are double U.S. levels.

“This is going to be a very challenging debate on a very complex topic,” said Andrei Marcu, senior adviser at the Centre for European Policy Studies. Marcu said there’s a growing realization that climate leadership “will need to be accompanied by measures that ensure that we’re not endangering the industrial core of Europe.”

Europe’s next move is crucial for the international discussion about how to rein in global warming that scientists say is caused by record gains in fossil fuel pollution. The region has the biggest emissions trading system and the most widespread curbs on carbon emissions, underpinning the United Nations effort involving 190 countries to adopt a global limit.

EU Climate Commissioner Connie Hedegaard is pressing for member states to settle on a general direction for climate policy in time for a Sept. 23 summit, where UN Secretary General Ban Ki-Moon is seeking pledges that can underpin a treaty limiting emissions to be approved in 2015.

The new greenhouse-gas goal will include a common target for about 12,000 utilities and manufacturing companies in the EU emissions trading system. It currently aims to cut pollution by 21 percent in 2020 compared with 2005 levels, the most sweeping limits of their kind in the world. Member nations will also have individual, legally binding targets for sectors that are not covered by the emissions trading system.

The EU benchmark carbon price has slumped about 76 percent in six years as a debt crisis and a recession cut industrial output in Europe, curbing demand for pollution rights. The cost of emitting a metric ton of carbon dioxide hit a record low of 2.46 euros in April last year and was at 5.06 euros today at the ICE Futures Europe exchange in London.

More than ever before, the bloc’s own political dynamics will intrude on the debate. The European Parliament, which together with the governments decide on the region’s laws, is preparing for elections in May. The five-year term of the current European Commission, the bloc’s regulatory arm, expires in October.

“We should have had a thoughtful discussion about the future energy and climate framework a year or two before elections,” said Jerzy Buzek, ex-president of the EU Parliament and former Prime Minister of Poland. “I am convinced that we can reach a compromise, but now the debate will be mainly driven by politics.”

Energy costs are rising on Europe’s political agenda like never before. German Chancellor Angela Merkel has pledged to overhaul support for renewables after consumer electric bills surged with the nation’s shift away from nuclear power and toward more expensive wind and solar power. U.K. Prime Minister David Cameron is looking for ways to reduce utility costs after the opposition promised to freeze bills. Spain, Italy, Portugal and the Czech Republic have slashed subsidies for solar power.

Retail power prices have risen 65 percent and natural gas by 42 percent between 2004 and 2011, more than double the inflation rate of 18 percent during the period. That’s according to a draft report by the commission on energy developments in Europe that will be part of the package released tomorrow.

Energy policies, climate ambitions, industrial competitiveness and economic growth are all closely related and need to be discussed together when Europe shapes its future strategy, EU President Herman Van Rompuy said in a letter to member states on Jan. 20. “Each and every one of these issues deserves our utmost attention,” he said.

“What we must do is to keep climate policy, but we have to put at the same level cost competitiveness for energy and security of supply,” said Emma Marcegaglia, president of BusinessEurope, a Brussels-based employers’ group representing companies from 35 European countries. “If we go for 40 percent unilaterally this would be absolutely against industrial competitiveness of Europe. The goal has to be realistic.”

Utilities such as RWE AG and other companies that invest in power generation say they need some sort of targets from the government to get a sense how energy policy will evolve in the next decade.

“Europe is unlikely to have very cheap energy so we have to have smart energy,” said Jesse Scott, EU policy adviser for Eurelectric in Brussels. She favors energy efficiency projects and replacing imported fuels with electricity, particularly renewable.

The commission’s paper will set out suggestions for those policies that member governments will debate in the coming months. EU heads of state will discuss the paper at a meeting in Brussels starting March 20. Energy and environment ministers may take up the debate in May in Athens.

The EC’s ambition is to have draft legislation ready by the first quarter of 2015, in time for the UN global warming talks that culminate in December of that year.

Germany, France, Italy and the U.K. all have called for setting a goal of reducing emissions by at least 40 percent by 2030. Poland, which gets 90 percent of its electricity from coal, has campaigned against such strict targets. Many nations haven’t yet said where they stand, waiting for the commission’s proposal to catalyze debate.

Another friction point in the EU plan is whether to have a separate target for renewable energy use. In the 2007, EU leaders pledged to cut emissions by 20 percent and make renewables account for 20 percent of energy consumption by 2020. Germany, France, Ireland, Denmark and Belgium are pushing for a target. The U.K. opposes that, arguing a broader goal to cut emissions by 40 percent, rising to 50 percent in the event of an ambitious global deal, is enough.

“The voters in many member states will become increasingly resistant to climate targets where they are deemed to be expensive, inflexible and insensitive to national and regional needs,” Cameron wrote in a letter to the European Commission’s President Jose Barroso last month. The U.K. analysis shows that a renewables target would add up to an additional £9 billion per year to the country’s energy bills in 2030, according to the letter obtained by Bloomberg News.

“Failure to include a binding renewable energy target would completely undo the undisputable success of the existing 2020 target in driving forward renewable energy,” said Claude Turmes, a member of the Greens group in the EU Parliament. “It is a sop to those countries like the UK and Poland that want to pursue risky or dirty energy from nuclear, coal and shale gas, and will totally undermine investor certainty.”

The EU will have to spell out how that target might be enforced and whether it would apply to each member state or to the EU as a whole, both among the most crucial decisions.

One element likely to be excluded from this policy: new ambitions for energy efficiency that build on 2007 priorities.

For environmental groups, the goals being discussed aren’t strict enough, and renewable energy, rather than being a drag on the region’s economy, doesn’t add much to consumer bills. State aid for renewables cost 30 billion euros in 2011, less than the 35 billion euros extended to nuclear and about the same as the 26 billion euros for the fossil fuel industry gets, according to Greenpeace.

“It’s ridiculous to claim that renewable energy subsidies are the cause of high energy bills when they are in fact bringing down wholesale energy prices,” said Frederic Thoma, Greenpeace EU policy adviser in Brussels. “Utilities that have invested heavily in fossil fuels and nuclear energy are the ones that continue to keep household energy prices high.”