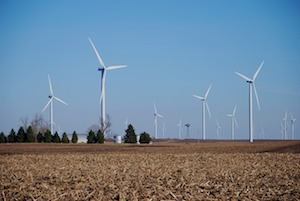 The company pulled the plug Friday on what would have been the biggest-ever U.S. wind farm. Texas regulators rejected the project Thursday because it didn’t offer enough benefits for ratepayers, and Oklahoma came to a similar conclusion in February.

The decision shows that regulators are looking very closely at major wind projects as they face more competition with cheap natural gas. While some of the big wind farms already in operation got the green light in part because of renewable-energy mandates, new projects increasingly will have to hold their own based on the numbers.

“More and more wind projects are being presented as cost savings for consumers, as opposed to just for meeting renewable energy goals,” said Paul Patterson, an analyst at Glenrock Associates LLC. “And that means the economics of projects are going to be heavily scrutinized.”

The 2-gigawatt wind farm had faced significant barriers from the start. American Electric was seeking up-front guarantees from regulators that customers would pay the costs, plus a profit, and the cancellation raises questions about whether that model will help utilities build other big renewable energy projects. Changes to the federal tax code and increasing competition from natural gas changed Wind Catcher’s economics, creating doubt about its potential benefits for ratepayers.

“Basically it commits customers to pay $4.5 billion for a new system and you don’t know how that’s going to compare over time to what power would have cost,” Kit Konolige, a New York-based analyst for Bloomberg Intelligence, said Friday. “It would have been a big increase in the rate base. When and how it would have paid off — those are fair questions.”

The project that Invenergy LLC was developing in Oklahoma would have also served customers in Texas, Louisiana and Arkansas. American Electric’s Southwestern Electric Power had proposed owning 70 percent of it.

Oklahoma, which hadn’t made a final decision, found in February that American Electric had failed to prove there was an economic need for the project and it left customers shouldering too much of the risk. Arkansas and Louisiana had already approved the project.

A coalition of Texas industrial energy users in March said that federal tax cuts approved in December were likely the “final nail in the coffin for the Oklahoma wind farm,” according to a filing with the Texas Public Utility Commission. Lower tax rates reduced the gross value of federal production tax credits for Wind Catcher by about $245 million, the group said.

“These huge projects have always been a challenge,” said Amy Grace, a New York-based analyst at Bloomberg New Energy Finance. “It’s hard when you’re competing on economics with some of the cheapest wholesale power prices in the world.”