Solar power arrays are often exposed to the worst weather that the planet can dish out, including hurricane force winds that can gust up to 200 miles per hour on the U.S. Eastern seaboard and on islands like Hawaii and Guam. Whether the solar panels are mounted on the roof, in a stationary ground array or in moving trackers, calculating wind load is a major factor in the system design.

Wind is one of the most frequent causes of damage to solar arrays, said several industry officials. In Spain, in the middle of the last decade, several large dual-axis solar trackers failed as a result of wind, according to Dan Shugar, the CEO of NEXTracker, based in Fremont, CA. “But horizontal trackers as a category have been very reliable since then, so the solar industry converged on the horizontal track as the best practical way to get energy gain, avoiding all the steel it would take to protect a dual-axis,” he said.

Wind deflection on solar trackers may be the most complicated design calculation in crafting the product since the tracker parts move in a variety of directions simultaneously. “If you don’t have a mitigation system, such as a torsion limiter or dampers, the wind can make an array oscillate wildly,” noted John Williamson, director of engineering at Array Technologies, based in Albuquerque.

Various designs attempt to limit wind impact on trackers. “We have gone to a round tube unlike most others manufacturers that use square or other shaped steel – so we pick up 30 percent more torsional strength,” said Shugar. “We also have gone with a balanced design,” he said, noting that the array will return to a stow or flat position under gravity. “And our stowing speed is fast – from full rotation to stow in one minute,” he said. “Since wind builds quickly, we want to stow quickly,” he added. 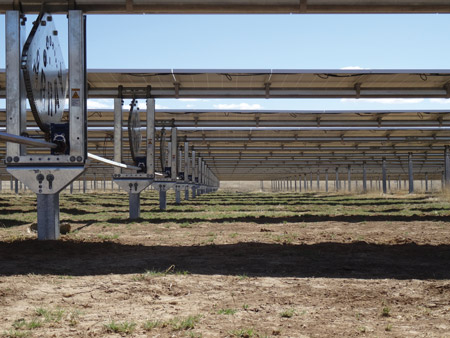 Multiple DuraTrack HZ v3 tracker rows are connected by a rotary drive shaft and driven by a single industrial 2 HP, 3-phase A/C motor. Each v3 motor can drive up to 28 rows of 80 modules each. Credit: Array Technologies.

It’s important to note that stowing may be a prescribed response to wind on the edge of a field, and not be necessary within the more protected center. In fact, stowing a solar panel is not necessarily the best solution for a rapid build-up, others argue. “We’ve never relied on stow for our systems; we design for no stow. Wind forces on a tracker at a zero degree position still can have a significant load on the array and near-peak torque on the system,” pointed out Array Technology’s Williamson. “With our new V3 design, we have come up with a passive stow design and added a torsion limiting device that allows it to move to a position where there is less torsion on the array,” he said. “Our previous generation was typically built to 115 mph, but the worst-case install was built to handle up to 175 mph. This was proven in the field at multiple sites including an installation located at the NREL Wind Technology Center, in Boulder, Colorado. The new version would be able to handle 135 mph standard, and similarly configurable to withstand higher speeds,” he said. Wind microbursts, or downbursts, can cause winds up to 175 mph on dry land, so exposure to the wind is a given regardless of location.

Since wind can affect the outer edges of a solar array field much more intensely, outer rows need to be built to be both stiffer and stronger. NEXTracker, for example, uses thicker steel on the outer rows to help design for this effect. Wind, nonetheless, is difficult to predict. “What some solar companies assume is that wind continues to decrease the further that you get into an array, which is not necessarily the case. Arrays are in a turbulent layer of the atmosphere, and wind is very random and chaotic in nature,” said Williamson.

Crunching the numbers for such wind variables requires a set of tools that includes both computer models and full-scale models. “Computational fluid dynamics will calculate wind load but nothing beats the wind tunnel from the standpoint that you are testing a scale model,” said Shugar. 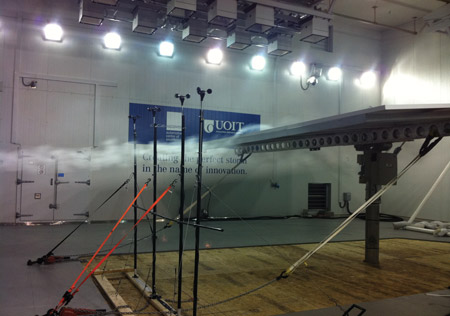 A host of wind tunnel testing facilities, including government labs, in the United States and Canada, permit the analysis of a full-scale solar array to meet certification or building code requirements. Some companies make extensive use of them. “We have an industry-leading 120 mph wind rating and are the only manufacturer we know of to conduct an in-tunnel, full (dual) tracker wind load test. We wanted to demonstrate to the industry our design strength and commitment to engineering a tracker that will withstand the elements,” noted Andrew Savage, the chief strategy officer for AllEarth Renewables, based in Williston, VT.

Array Technologies also has conducted extensive wind tunnel testing, including tests at the Langley Full-Scale Wind Tunnel, in Hampton, VA, which has since closed. Work there has been taken up by Old Dominion University’s Frank Batten College of Engineering and Technology, Norfolk, VA.

Not all jurisdictions accept wind tunnel testing as sufficient, however. Until 2013, the city of Los Angeles, required traditional anchored mounting solutions for rooftops rather than non-penetrating ballasted designs, because the LA Department of Building and Safety did not accept wind tunnel data to justify lower ballast requirements. It was not until PanelClaw became the first mounting system company to have its full wind tunnel data results approved and permitted by LADBS for use in ballast designs that the regulation changed. The North Andover, MA-based company’s Polar Bear Gen III ballasted design will withstand winds in excess of 120 mph, equal to a Category 3 hurricane. 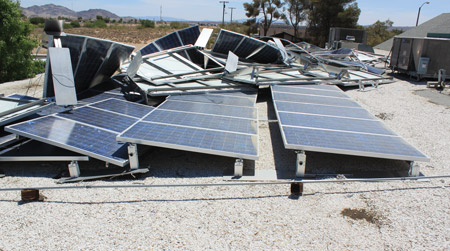 The solar industry follows wind load provisions that are currently promulgated by the American Society for Civil Engineers (ACSE), based in Reston, VA. The latest standard is the 2013 ASCE/SEI 7-10. But that standard relates more to buildings than to solar arrays, several manufacturers complain. In a 2012 statement to Renewable Energy World, SunLink CEO Christopher Tilley said, “while there are established snow and seismic load standards that can be applied to PV systems in a fairly straightforward manner, there is very little guidance on wind loads. Engineers and permitting officials have therefore been left with the choice of applying the building code in ways not intended or accepting designs based on wind tunnel testing without a standard means to validate the testing approach or results. Neither method assures that appropriate wind design values are used.”

The Underwriters Laboratory, based in Northbrook, Ill., nominally covered wind load for PV installations in the 2015 version of UL 2703, but is also criticized for falling short. “UL 2703 has been good for the industry but it is not an absolute standard. Having a true code in place would level the playing field by weeding out the companies that don’t address important safety and performance factors, such as wind and snow load testing, corrosion testing and fire resistance,” said John Klinkman, VP of engineering at Applied Energy Technologies, in Clinton Township, MI. 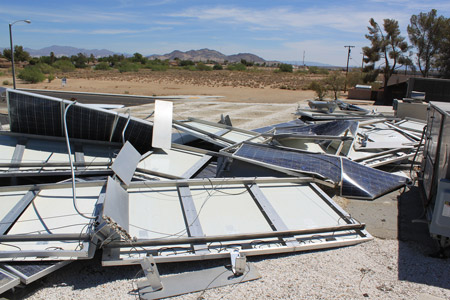 The Structural Engineers Association of California (SEAOC), based in Sacramento, has done much work toward helping to set an industry standard for PV wind loading requirements, said Rob Ward, the chief structural engineer for SunLink. The SEAOC PV committee conducts on-going work in development of code change proposals to the wind design provisions in ASCE. The group has produced its own guidelines for wind load and solar, including the most recent SEAOC PV2-2012, Wind Design for Low Profile Solar Photovoltaic Arrays on flat Roofs.

SunLink began testing its line of PV products in 2006 with the help of Boundary Layer Wind Tunnel Laboratory (BLWTL) at the University of Western Ontario, based in London, ONT. BLWTL has recently upgraded its facilities with four new wind tunnel control and data acquisition systems that allow for completely automated tests capturing data at speeds up to 100,000 samples per second each.

SunLink ran 70 models and configurations through more than 1,000 tests at the BLWTL lab, developing a unique database. The tests included variations in tilt angle, roof height, row spacing, building height, set-backs from the roof edge, and various deflector/shrouding strategies that are affected by wind. The company has shared this database with SEAOC, and as a result, the organization is closer to developing a wind load norm with a broad industry consensus, Ward said.

SunLink also worked with BLWTL and the engineering firm of Rutherford & Chekene, based in San Francisco, Calif. to develop software that will help product designers test their designs against the standards of ACSE 7-10.

While consistently strong, heavy winds are a blessing for wind farm owners, the same is not be true for PV system owners and operators. But with careful design considerations, increased focused on standards and technology that responds well to all wind loads, PV installation companies can ensure that their arrays will not be blown away.