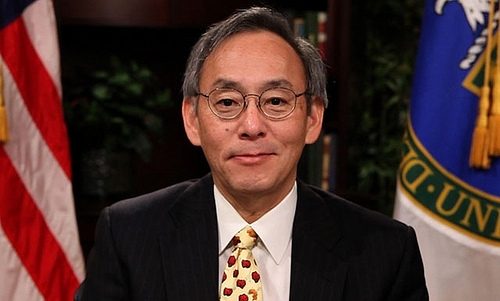 WASHINGTON D.C. — U.S. Energy Secretary Steven Chu, who drew criticism from Republicans over his support for loans to Solyndra LLC before the solar-panel maker went bankrupt, will leave his Cabinet post in President Barack Obama’s second term, according to two people familiar with the matter.

Chu’s departure will be announced as soon as next week, according to one of the people. Both requested anonymity to discuss personnel matters that haven’t been announced. The people didn’t identify potential replacements.

The exit will leave the Obama administration with vacancies at the top of the three departments that oversee energy and environmental policy. Interior Secretary Ken Salazar and Lisa Jackson, who headed the Environmental Protection Agency, have announced their intention to leave the administration.

Chu, 64, was a career scientist and co-winner of the Nobel Prize for physics when he joined the Cabinet in January 2009. Supporters said Chu brought a fresh perspective to discussions often dominated by politics in Washington.

He led a group of scientists who studied ways to cap BP Plc’s Macondo well, which gushed crude into the Gulf of Mexico for 87 days in 2010, and helped create a division within the department dedicated to backing breakthrough energy technologies off the ground.

“Dr. Chu is focused on his job as secretary each day and hasn’t made any announcements about his future plans,” Bill Gibbons, Energy Department spokesman, said in an e-mailed statement.

Some Republicans in Congress said his leadership was tarnished by the Energy Department’s endorsement in 2009 of Solyndra’s $535 million U.S. loan guarantee and other clean- energy projects.

The solar-panel maker collapsed two years later, prompting a congressional investigation of allegations that the award was approved to benefit Solyndra’s biggest investor, an Obama supporter. Thousands of pages of correspondence from the administration and Solyndra’s investors failed to back up the contentions.

Solyndra nevertheless became a frequent talking point for Republicans on the campaign trail last year. Republican presidential candidate Mitt Romney called it a symbol of the Obama administration’s economic failures during a visit to the company’s shuttered factory in Fremont, California.

This resulted in more attention than usually comes to the department, whose budget is largely spent on maintaining the nation’s nuclear stockpile. The 2009 economic stimulus provided more than $35 billion to the Department of Energy for clean- energy projects — more than its annual budget. That money financed the loan-guarantee program under which Solyndra received its funding.

In other ways, the loan program was a success. An independent review conducted for the White House found that the programs that had received support were doing better than anticipated.

“What he could have done, he did a great job with, which was implementing the stimulus bill and getting 30 some billion spent out of DOE, and doing it without fraud and doing it effectively,” said Richard Caperton, director of clean energy investment at the Center for American Progress, a Washington- based group that promotes progressive policies.

“Not every company, not every product will succeed,” Chu said in a 2011 speech. “But there’s no reason to sit on the sidelines and concede leadership in clean energy.”

Chu was director of the Lawrence Berkeley National Laboratory, a part of the Energy Department, and an applied physics professor at Stanford University in California before he joined the administration.

Chu’s Facebook page says he carried out Obama’s “ambitious agenda to invest in alternative and renewable energy.” He practiced what he preached. He often biked to work, and he has said upgrades to his California home meant he didn’t need to turn on the air conditioning.

Joshua Freed, vice president for clean energy at the Third Way, which says it promotes consensus among the political parties, said Chu deserves praise for promoting the Advanced Research Projects Agency — Energy, a division within the department that backed new energy technologies.

Chu sought to reorient the department to work more closely with industry to bring the technologies to market, Freed said.

“There is a practical and future edge to it that we haven’t always had with the department,” Freed said in an interview.