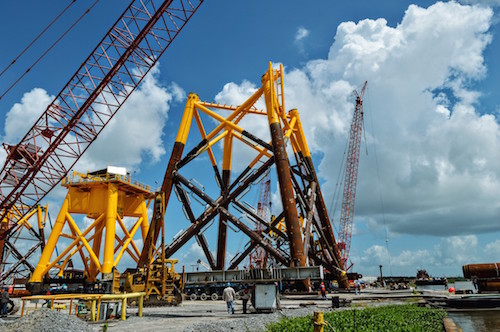 After the most recent oil production boom in the Gulf of Mexico ended, oil producers turned to small, light offshore structures to exploit the smaller reserves in shallow waters. These structures could be built and installed quickly and easily, allowing for more gas to be extracted in a shorter timeframe.

One example of this new type of platform is the “Inward Batter Guide Structure,” (IBGS). In early 2001, Louisiana-based Keystone Engineering submitted its first IBGS design for construction for applications offshore of Nigeria in the Oyot field.

The IBGS, also called the “twisted jacket,” foundation was first installed (via liftboat) in the Gulf of Mexico in March 2005. That summer this structure took a direct hit from Hurricane Katrina, but as this devastating hurricane passed through the West Delta field in Louisiana, Keystone’s IBGS was left undamaged.

Today Keystone is bringing its offshore oil expertise to the emerging offshore wind industry in the U.S. by providing engineering design and consulting services to the Block Island Wind Farm project in Rhode Island. This is the first commercial offshore wind farm in the country.

The Block Island wind farm is under construction off the coast of Rhode Island in the U.S. and should go online in late 2016. In August the turbines are expected to arrive at the site and be installed. The US $290 million project will use five 6-megawatt GE wind turbines that are supported by Keystone-designed substructures, giving it a total capacity of 30 megawatt.

Keystone designed the substructures by adapting the IBGS steel jacket foundations used in the oil and gas industry as the design-basis for the deep-water wind turbine support structures.

Working on five, 24-core computers running 24 hours a day for 10 days, the design team conducted 2,334 simulations, 30 million time steps, and 25 load cases (including operating, storm, start-up, shut-down, fault, maintenance, and installation) for waves of up to 19 meters high and winds from eight directions at speeds ranging from 2 meters per second to 58 meters per second. SACS enabled Keystone to streamline the design and analysis of the simulations, and accurately manage terabytes of project data to minimize the possibility of errors.

This integration of offshore engineering software with DNV GL’s Bladed, a wind turbine simulation tool, enabled Keystone to incorporate load models from the turbine generator designer. The process helped optimize the design of the total structure and ensure safe operation under a wide range of weather conditions, including tropical storms, maximizing revenue. An avoidance band in the operating speed of the turbine could cause losses of production up to 50 percent over the lifetime of the turbine.

Using SACS, Keystone performed more than 3,000 time-domain simulations for each design iteration, and conducted more than 150 simulations in parallel, reducing cycle time by 50 percent compared to typical European offshore wind projects. The resulting foundation is designed to withstand the 100-year hurricane and checked for robustness against the 1,000-year hurricane. The foundation requires less steel than a comparable foundation and can operate in a much wider weather window commonly found far off the northeast coast of the U.S.

For more than 40 years, the world’s offshore engineers have used advanced engineering software, such as SACS, for the design, fabrication, installation, operations, and maintenance of fixed offshore structures. The use of such software is widely specified to ensure code compliance across the lifecycle of these structures and is used by engineering certification firms such as American Bureau of Shipping, Bureau Veritas Group, China Classification Society, Germanischer Lloyd AG, DNV, and Lloyd’s Register Group, as well as engineering firms.

The software enables engineers to dynamically model any type of offshore structural system and provide optimal design against environmental loads, such as waves, wind, and current, in addition to mechanical loads from wind turbines. Engineers can also fully explore the effects of fatigue, ship impact loads, transportation, and installation.

For the wind power market, the software has been extended to include more complex loads and geometries and is integrated with most turbine manufacturer simulation software for a fully coupled analysis. This integration allows engineers to simulate the loads on a wind turbine platform structure and optimize these steel structures for cost, installation weight, and strength.

Keystone leveraged the technology developed for the offshore oil and gas industry to meet the complex design criteria for the jacket foundations. The iterative process optimized the jacket design and reduced the amount of steel needed for the substructure, while still ensuring a design life of more than 20 years. As a result, the Block Island Wind Farm jackets are 15 percent lighter than a previous design used for the same type of wind turbine in the North Sea. The optimized design also reduced installation costs by more than 20 percent compared to traditional monopile construction and can survive hurricane-force winds.

These benefits are why this technology has been widely adopted in the offshore oil and gas and wind markets.