Van Jones says it is the work that most needs to be done and it can be done by the people who most need the work. It is likely the key to success in the world’s fight against global climate change.

Installing solar panels? No. Great thing to do but not the key. Building wind turbines? Do it with both hands. But that’s not it. Emissions trading in the Cap&Trade markets? Not even close. What is it? Energy Efficiency, the turning of houses, office buildings and factories into negawatt generators.

Negawatts are the watts saved from not being used. Not only are they the cheapest source of New Energy but investing in them saves $2-to-$3 dollars for every dollar that is spent, savings that can be invested in New Energy megawatts.

One small problem: As reported in Energy Efficiency Services Sector: Workforce Education and Training Needs from researchers at the Lawrence Berkeley National Laboratory (LBNL) of the U.S. Department of Energy (DOE), there aren’t nearly enough people trained in doing Energy Efficiency to get the job done.

That small problem, however, presents an enormous opportunity. Thanks in part to a new awareness of savings opportunities and in part to funding in the American Recovery and Reinvestment Act (ARRA) of 2009, Energy Efficiency began growing last year and is expected to continue expanding in the U.S. over the next 10 years as fast as the nation can deploy training and education programs for the Energy Efficiency services sector (EESS) workforce. ::continue::

The EESS currently has ~120,000 full-time equivalent workers, calculated in the LBNL study as person-year equivalents (PYE). Total employment in the sector is ~400,000 people, many that do not do EESS full-time. Through 2020, employment in EESSs could grow as much as 11% per year. It is expected to at least double and possibly grow 4 times over to employ 220,000-to-380,000 PYE, which is ~1.3 million people. 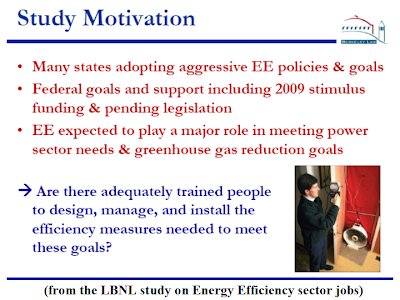 Professional occupations (engineers, architects, managers, program planners, program evaluators) will provide ~25-35% of the future EESS workforce and building and construction contractors and trades will provide the other 65-75%.

But: Of 492 higher education and training programs studied by the LBNL researchers, only 43 had engineering, architecture, policy, building trades technical training, and/or interdisciplinary programs with a minimum curricular emphasis on Energy Efficiency.

In this detailed academic study rigorous with definitions and categorizations for which most are not going to have much patience, there is a buried message of crucial urgency to a nation hungry for new opportunity.

The message is that the New Energy economy is coming and it is bringing with it something else along with the much more exotic solar power plants on acres of mirror-covered deserts and the grand wind turbine installations marching across the countryside. It is also something much less noticeable in the neighborhood but just as important as rooftop solar panels.

What is coming with the New Energy economy is an Energy Efficiency sector that will find work in every house in every neighborhood from Harlem to Hunters Point, from Cambridge to La Jolla and from Tampa to Tacoma. It will find work in the shops on Main Street, the farmhouses and barns of the heartlands and the factories on the other side of the tracks. It needs every strong arm, every mechanical mind and every smart planner it can find.

The job market may be the economic recovery’s lagging indicator but this study shows that the Energy Efficiency sector is ahead of the curve on a whole new world of opportunity. If the nation gets busy and takes advantage of it. 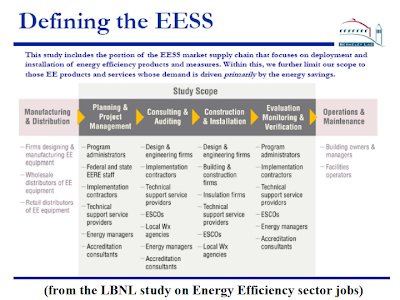