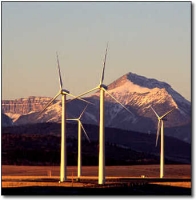 Washington D.C. [RenewableEnergyAccess.com] With the Energy Bill on its way to the President’s desk to be signed into law, the wind power industry is reveling at its prospects for the next two years thanks to a two-year extension of the federal tax credit which, historically, has been a major development driver.

The PTC, which was scheduled to expire on December 31, 2005, provides a 1.9 cent-per-kilowatt-hour (kWh) tax credit for electricity generated with wind turbines over the first ten years of a project’s operations, and is a critical factor in financing new wind farms. The extension also represents a policy first for wind power. “This is the first time that an extension of the production tax credit for wind energy has been approved before the credit expires, and, following the past six years of boom-and-bust cycles caused by successive expirations, that is very good news for the industry,” said Randall Swisher, Executive Director of the American Wind Energy Association (AWEA). “The timely extension of the credit allows companies to plan for growth, create jobs, and provide more clean power to customers nationwide.” Up to 2,500 megawatts of wind energy capacity are scheduled to come on line in the U.S. this year, bringing new power to the equivalent of 700,000 homes and injecting over $3 billion of investment into the power generation sector. With the timely extension of the PTC, the American Wind Energy Association anticipates that strong growth momentum will continue in 2006 and 2007. By simply changing the PTC expiration date to December 31, 2007, the extension leaves in place the PTC’s current 1.9 cent per kilowatt-hour value, the annual inflation adjustment provision, and the 10-year term to generate credits following the installation of a wind turbine. The bill does not contain restrictions on the availability of the PTC or place limits on offshore wind projects, as some anti-wind lawmakers had proposed. The final energy bill does not include the Senate provision calling for 10% of the nation’s electricity to be generated from renewable sources like wind and solar by 2020, also referred to as the Renewables Portfolio Standard (RPS). “By failing to include in the energy bill this provision to boost renewable energy development over the longer term, Congress missed a unique opportunity to enact forward-looking energy, economic, security, and environmental policy all at once,” said Swisher. The bill also does not include an incentive for small wind systems for homeowners and small businesses, although it provides a 30% credit capped at $2,000 for residential solar systems and fuel cells. Such incentives are needed to help reduce the up-front cost of purchasing such systems. “With the timely extension of the PTC, the wind energy industry can move ahead – uninterrupted – to produce thousands of additional high-paying jobs, boost rural economic development, and generate clean energy for consumers,” said Steve.