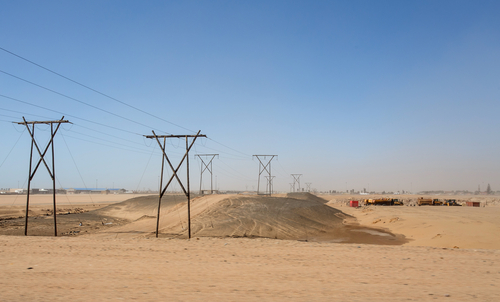 The African Development Bank’s (AfDB) new president wants to bring electricity to the poorest parts of the continent within a decade and says he can mobilize $55 billion a year to make it happen.

Akinwumi Adesina, who was elected to lead the lender in September, is undaunted by the scale of the challenge. At least 620 million people have no access to power, including vast populations in war-torn countries such as South Sudan, Somalia and the Democratic Republic of Congo.

“I’m not bothered by that amount – that money is there,” Adesina said in a phone interview. “Today Africa generates $540 billion in tax revenue per year. If you take 10 percent of that and devote it to the energy sector, the problem is solved. If we light up and power Africa, we can have a GDP growth rate of double digits without any problem at all.”

The comments set out one of the key priorities for the institution based in Abidjan, Ivory Coast, and suggests support for developers of both renewable and fossil-fuel generation plants. Adesina, the former Nigerian minister of agriculture, is implementing a program dubbed The New Energy Deal for Africa, which aims to extend electricity to the entire continent by 2025.

Adesina wants aid donors and African governments to scale up investment in energy and will use the bank’s leverage to encourage financial flows from private companies. The development bank said this month that it will triple its funding for climate-related projects to $5 billion per year. It also plans to reform the pricing of energy, utilities and subsidy programs in Africa’s energy industry.

The focus will be on renewables. It doesn’t rule out coal, which the World Bank is prodding development institutions to fund only in the most extraordinary circumstances.

“The AfDB isn’t against coal,” Adesina said, maintaining the policy of his predecessor,  Donald Kaberuka. “We look at all sorts of energy. Africa will develop with what is has. It needs green growth, and we will move in that direction, but you cannot make the shift overnight.”

About $527 billion invested in Africa’s power industry between 2014 and 2025, with nearly 30 percent in renewables and over half in transmission and distribution, according to the International Energy Agency in Paris. About $93 billion of that will be for fossil fuel plants.

The AfDB will focus on big regional projects, such as the Inga Dam in Congo. It has the potential to generate 44 GW. It’s also backing the 310 MW Lake Turkana wind project in Kenya and solar plants in Morocco and South Africa.

The bank is working closely with public institutions, such as the World Bank, International Finance Corp. and the governments of the U.S., the U.K., Germany, Japan and China. It is also trying to spur private investment by reducing the risk of projects with partial risk guarantees and credit enhancement instruments.

It has recently created Africa50, a platform to work on project development, with the goal of leveraging $10 billion of private investment into the energy industry over the next 10 years.

“Africa has a lot of sovereign wealth funds and pension funds and we want to leverage them into energy asset classes,” Adesina said. There are also private equity funds investing in independent power projects, he said.