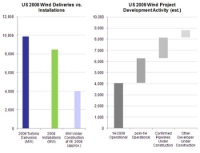 Massachusetts, United States [RenewableEnergyWorld.com] According to a recent brief from Emerging Energy Research, the US wind energy market could reach 8 GW installed in 2009, (including project spill-over from 2008 and new wind build), despite initial fears of a major drop in megawatts resulting from the financial crisis.

The firm said that 6.3 GW of wind have already been added in 2009, while more than 2 GW are under construction and scheduled for activation by year’s end.

“At face value it appears that the US market could witness its second-best growth year to date; however, if you remove spill-over build originally meant for completion in 2008, 2009 market activations will probably be closer to half of 2008 levels,” said Senior Wind Analyst at EER Matthew Kaplan.

Still, 2009 build-out has surpassed industry expectations. In the first quarter of this year, most market participants expected a significant drop in 2009 activations to well less than 6 GW based on frozen financial markets. However, a combination of projects planned for 2008 spilling over into 2009 and construction activity by developers eager to qualify for American Recovery and Reinvestment Act 2009 (ARRA) provisions, led to U.S. market growth nearing approximately 8 GW in 2009, according to Kaplan.

However, ARRA provisions and longer-term policy drivers, including RPS incentives, may help counter these short-term economic inhibitors, according to EER.

While project construction is picking up to obtain grant funding, delays due to the financial crisis indicate 2010 wind activations are more likely to remain stagnant compared with 2009. However, construction may surge so that projects meet grant requirements.

“The 2010 picture is not yet complete. On one hand, the project development environment continues to face serious bottlenecks, but on the other hand, the ARRA promises the wind industry more incentives than it has ever seen before,” said Kaplan. 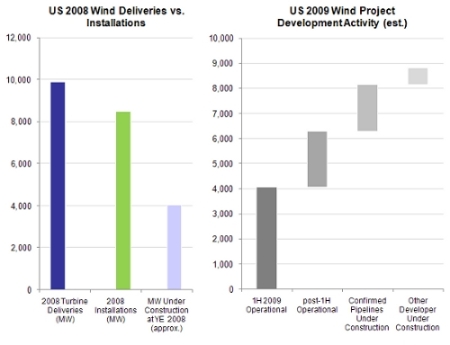