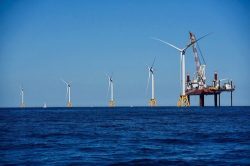 “With today’s landmark decisions, Massachusetts and Rhode Island are ready to pioneer large-scale offshore wind development that will light the way for our industry and nation,” Tom Kiernan, CEO of the American Wind Energy Association, said in a statement. “With world-class wind resources, infrastructure and offshore energy expertise, the U.S. is primed to scale up this industry and lead it. Becoming a world leader for offshore wind will open tremendous new opportunities for U.S. workers, factories, and ships throughout our coastal states.”

Vineyard Wind won a competitive bid in Massachusetts with a 800-MW offshore wind proposal that includes a generator lead line.

Massachusetts law requires the state’s electric distribution companies to obtain 1.6 GW of offshore wind energy by 2027. A request for proposals from the state called for long-term contracts for offshore wind generation and associated renewable energy credits totaling 400 MW, but bidders were able to submit proposals for up to about 800 MW. Bids were evaluated and selected by the state’s distribution companies and the Department of Energy Resources.

“Vineyard Wind is proud to be selected to lead the new Massachusetts offshore wind industry into the future,” Lars Thaaning Pedersen, CEO of Vineyard Wind, said.

Thaaning said Vineyard Wind is grateful for the time and commitment shown by many stakeholders, including Secretary of Energy and Environmental Affairs Matthew Beaton and Massachusetts Department of Energy Resources Commissioner Judith Judson.

“We look forward to working with the Commonwealth, the communities of the Cape, Islands, and South Coast, and all stakeholders in together fully realizing the enormous opportunity of offshore wind,” he said.

Vineyard Wind is a joint venture of Avangrid Renewables, a subsidiary of AVANGRID Inc., which is majority owned by Iberdrola S.A. and Copenhagen Infrastructure Partners.

Deepwater Wind was named the winning bidder in a competitive offshore wind procurement process between Rhode Island and Massachusetts. The company was selected to construct the 400-MW Revolution Wind project, which includes pairing the project with the Northfield Mountain pumped hydroelectric station operated by FirstLight Power Resources.

“Rhode Island pioneered American offshore wind energy, and it’s only fitting that the Ocean State continues to be the vanguard of this growing industry,” Deepwater Wind CEO Jeffrey Grybowski, said.

The Orsted and Eversource joint venture, Bay State Wind, was not selected in the Massachusetts competitive bidding process.

“We submitted what we considered a very competitive, but value-creating bid,” Martin Neubert, executive vice president and CEO of wind power at Orsted said. “While we’re of course disappointed by the outcome of the 83C solicitation, the U.S. remains a key market to us.”

Neubert said the company sees the U.S. market as a “long-term growth opportunity.”

“Together with Eversource, we’ll continue progressing our Bay State Wind project towards the next solicitations in New England and New York,” he said. “Orsted will also continue to develop our utility scale Ocean Wind project in New Jersey, and we remain engaged with our partner Dominion Energy in bringing offshore wind to Virginia.”

Are you interested in learning about foundation design, floating technologies, vessels substation design and more? If you said yes, register for #OWES18 and attend our conference sessions in the conference track “Engineering & Construction.” https://t.co/itoFY0zO0G pic.twitter.com/HMXVsf01YF