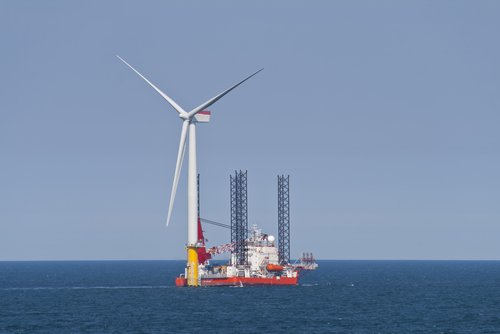 Dong Energy A/S, the world’s biggest offshore wind developer, said neither a British departure from the European Union nor the precipitous drop in oil prices will derail its plan to invest 6 billion pounds ($8.6 billion) in wind farms off the U.K. coast by the end of the decade.

The Danish utility plans to push ahead with three projects totaling 1.5 GW by 2020, Brent Cheshire, head of Dong’s U.K. unit, said in an interview in London. Dong expects to make a final investment decision on a fourth offshore wind farm, which at 1.2 GW would be the world’s biggest, “in the next few weeks,” he said.

Oil’s decline “has no impact on our investment profile for renewable energy,” Cheshire said. “We’ve made the investment decisions we’ve made up to 2020. There won’t be any impact” from a British decision to leave the EU.

The comments are a vote of confidence in the U.K.’s commitment to offshore wind technology, the only major renewable energy source not to face cutbacks in subsidies since Prime Minister David Cameron’s Conservatives won the election in May. Britain already has more than half of Europe’s total installed offshore wind capacity, and Dong’s new projects will help the country keep its lead.

Cheshire’s remarks are also good news for renewables, which face a competitive threat from fossil fuel alternatives as oil plummeted more than 70 percent in the past 18 months.

Dong has already spent about 6 billion pounds in the U.K., almost 5 billion pounds of which went for offshore wind. That’s helped costs for new projects fall to as low as 114 pounds per MWh last year.

A price of 100 euros (76 pounds) is “attainable” for projects agreeing contracts in 2020 and building three years later based on current technology and bigger supply chains, Cheshire said.

“We want to be competitive with combined cycle gas turbines by the mid 2020s,” he said. “That means you’ve got to get these very big turbines” with a capacity of more than 10 MW, he said.

To persuade manufacturers such as Vestas Wind Systems A/S and Siemens AG to develop such machines, governments must provide certainty on long-term demand, Cheshire said.

“We need to see the pipeline and the availability, and then we can get these subsidies down,” Cheshire said. “If we don’t get down to subsidy-free by the middle of the 2020s, then we really won’t have a business.”

Cameron plans to have a referendum by June over whether to exit from the European Union, which would affect trade rules between the U.K. and its EU partners.

Cheshire said his personal view is the EU “is working pretty well for the power system.”

“We don’t have a plan which says should there be Brexit we will massively change our investment plan,” he said. “Certainly up to 2020, that’s going to be pretty much cast in stone.”