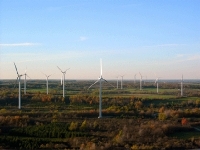 Wind power, long considered to be as fickle as wind itself, can be groomed to become a steady, dependable source of electricity and delivered at a lower cost than at present, according to a report from scientists at Stanford University.

The key is connecting wind farms throughout a given geographic area with transmission lines, thus combining the electric outputs of the farms into one powerful energy source. The findings are published in the American Meteorological Society’s Journal of Applied Meteorology and Climatology.

“This study implies that, if interconnected wind is used on a large scale, a third or more of its energy can be used for reliable electric power, and the remaining intermittent portion can be used for transportation, allowing wind to solve energy, climate and air pollution problems simultaneously,” said Cristina Archer, the study’s lead author and a consulting assistant professor in Stanford’s Department of Civil and Environmental Engineering and research associate in the Department of Global Ecology at the Carnegie Institution.

The researchers used hourly wind data, collected and quality-controlled by the National Weather Service, for the entire year of 2000 from the 19 sites. They found that an average of 33 percent and a maximum of 47 percent of yearly-averaged wind power from interconnected farms can be used as reliable baseload electric power. These percentages would hold true for any array of 10 or more wind farms, provided it met the minimum wind speed and turbine height criteria used in the study.

Another type of cost saving also results when the power combines to flow in a single transmission line. Explains Archer: Suppose a power company wanted to bring power from several independent farms — each with a maximum capacity of, say, 1,500 kilowatts (kW) — from the Midwest to California. Each farm would need a short transmission line of 1,500 kW brought to a common point in the Midwest. Then a larger transmission line would be needed between the common point and California — typically with a total capacity of 1,500 kW multiplied by the number of independent farms connected.

However, with geographically dispersed farms, it is unlikely that they would simultaneously be experiencing strong enough winds to each produce their 1,500 kW maximum output at the same time. Thus, the capacity of the long-distance transmission line could be reduced significantly with only a small loss in overall delivered power.

Archer said that if the United States and other countries each started to organize the siting and interconnection of new wind farms based on a master plan, the power supply could be smoothed out and transmission requirements could be reduced, decreasing the cost of wind energy. This could result in the large-scale market penetration of wind energy — already the most inexpensive clean renewable electric power source — which could contribute significantly to an eventual solution to global warming, as well as reducing deaths from urban air pollution.