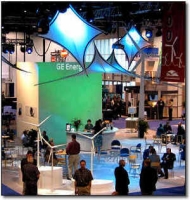 Denver, Colorado [RenewableEnergyAccess.com] This week, utility and business leaders, national and state policymakers and renewable energy advocates convened in Denver for the U.S. wind power industry’s annual trade show. The 4,100 attendees — the largest showing ever for the trade show — is indicative of the industry’s increasing movement and acceptance into the traditional power generation sectors.

WindPower 2005, hosted by the American Wind Energy Association (AWEA), featured more than 235 companies demonstrating advanced products and technology, an awards banquet honoring twenty-two individuals from across the nation for leadership in the development and promotion of the U.S. wind energy industry, and the U.S. launch of the Global Wind Energy Council (GWEC) uniting the global wind energy industry and its representative associations (see first link below to related story). High-tech wind energy equipment worth $3 billion will be installed across the U.S. in 2005. Wind energy facilities in 30 states currently total 6,740 MW of energy capacity from coast to coast, producing enough power for the equivalent of 1.6 million households. The industry has averaged growth rates of up to 30 percent in the U.S. and worldwide. With this growth, however, have come some growing pains for the industry seen primarily in the form of continued opposition from utilities and from increasing aesthetic and environmental opposition to wind power projects. “It’s all part of growing up,” said Randall Swisher, executive director of AWEA, addressing a GWEC meeting at the trade show. “We are no longer in the green ghetto.” The industry’s growth has also been stifled by inconsistent government support. The Production Tax Credit (PTC), the federal government’s primary support mechanism for wind power, has been enacted for only short periods of time and regularly allowed to expire by Congress. The inconsistent business climate has not allowed wind energy companies to make the right investments to achieve their full potential. Despite these growing pains, the wind power industry has continued to grow and evolve. New exhibitors at this year’s conference included Siemens, which purchased Bonus Wind Energy in late 2004; and Goldman Sachs, which purchased a controlling interest in Zilkha Renewable Energy earlier this year. The industry’s annual awards banquet recognized over twenty individuals for accomplishments ranging from the passage of the first voter-approved renewable energy standards initiative (in Colorado) to Congressional leadership on promotion of the renewal of the federal production tax credit for wind energy (for a full list of the award recipients, see the second link below). “Wind energy today is a global, multi-billion-dollar industry,” Swisher said, “and the growth of this conference reflects the dynamic market for wind power. Our association believes that, with stable, supportive federal policy, wind energy could provide six percent of the nation’s electricity by 2020 – all from a clean, domestic, and inexhaustible source.”