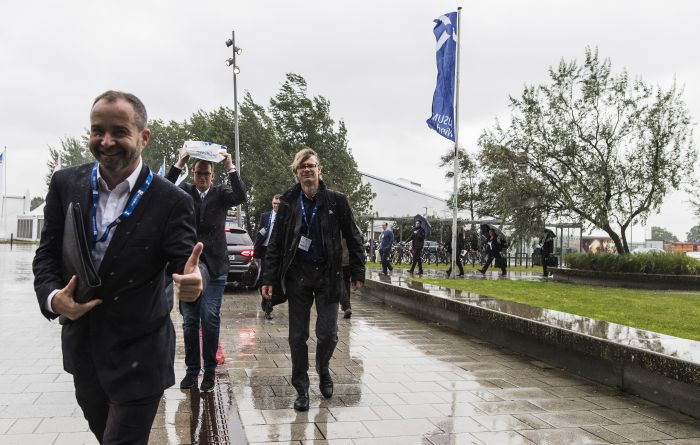 On Wednesday, September 13, as Solar Power International attendees and exhibitors were packing up to go home after a great show in Las Vegas, on the other side of the Atlantic in Germany, attendees of Husum Wind, one of the largest wind energy trade shows in the world, were recovering after being evacuated due to a stronger-than-forecasted cyclone “Sebastian.”

The cyclone forced the 650+ exhibitors and all attendees in the lightweight exhibition to leave the exhibit hall as wind gusts of up to 140 km/h [87 miles per hour] swept through the north-western part of the country.

But on September 14, the halls were reopened, exhibitors we able to return to their booths and attendees returned to the show.

“Cyclone Sebastian created a bit of turmoil yesterday, but the evacuation of the halls proceeded in an orderly manner,” said Peter Becker, managing director of Messe Husum & Congress, adding “we are pleased we were able to open all the exhibition halls again today,”

Daniel Schauer, Managing Director ee technik gmbh commented: “Sebastian also showed the non-North Frisians why Husum is the cradle of the wind industry. The hurricane temporarily interrupted the trade fair but we don’t let that dampen our spirits: we spontaneously shifted our stand event into our office building and postponed our appointments where possible.”

Husum Wind 2017 runs from Sept 12-15 and takes place every other year in Husum, Germany, which is on the North Sea coast. Over 650 exhibitors from the onshore and offshore wind industries attend, according to the show organizers. Next year Husum Wind’s sister show, WindEnergy Hamburg, will be held at Hamburg Messe from 25 to 28 September 2018.