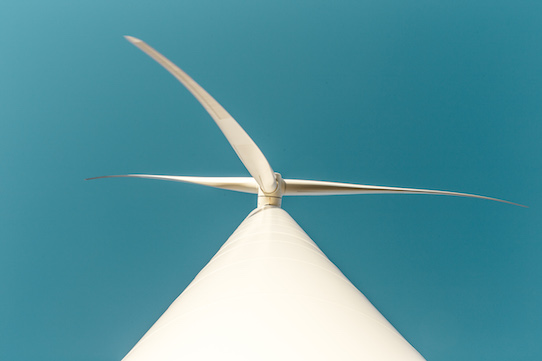 Xcel Energy recently said it plans to call for $6 billion in wind and solar energy investment as part of what it says will be Minnesota’s most cost-effective way to comply with the Clean Power Plan, the nation’s first ever carbon emission reduction rule for existing power plants.

“We think it is a good business plan, period,” said Laura McCarten, a regional vice president for the Minneapolis-based utility. McCarten also said, according to reporting by Minnesota Star Tribune’s David Schaffer: “Xcel’s analysis of the strategy, which speeds up wind and solar investment in this decade, shows it to be a cost-effective way to reduce greenhouse gas emissions by 60 percent by 2030 — likely beyond Minnesota’s requirements under the Clean Power Plan.”

Xcel Energy’s statement about using wind energy and solar as the most cost-effective way to comply with the Clean Power Plan (CPP) comes as new analysis shows Congress helped add a “bridge” to the CPP’s compliance years, according to the Rhodium Group, by passing a multi-year extension of the Production Tax Credit (PTC) late last year. The long term policy certainty and wind power’s 66 percent drop in costs over the last six years makes wind energy one of the “technologies of choice for the entire CPP compliance period” and “the tax extenders allow states to meet pending carbon dioxide regulations almost exclusively with zero-emitting renewables,” according to Rhodium. 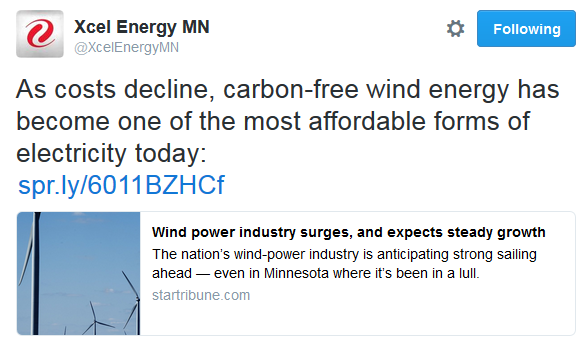 Xcel Energy clearly recognizes the value in today’s historically low wind prices, which are being driven in part by the recent extension of the PTC. In the company’s preferred plan for the next 15 years, which is currently pending before the Minnesota Public Utilities Commission, they propose adding an additional 1,800 megawatts (MW) of wind by 2030, 800 MW of which are slated to be added by 2020. Procuring these resources in the near-term will allow Xcel to capture the full tax benefits of the PTC, translating to even greater savings for their customers. Xcel notes in their filings that the recent extension of the PTC and ITC will reduce the cost of their plan by $202 million.

Xcel Energy’s decision to use renewable energy as the most cost-effective way to comply isn’t surprising, given the utility will reportedly invest $3 billion in wind energy in its Minnesota region by 2030 and its recent history of promoting wind energy as being one of the lowest-cost, reliable options to build a less carbon-intensive energy mix.

Also according to the Star Tribune’s Shaffer: “Xcel has said new wind power, with the subsidy, costs less over time than buying fuel to burn in existing power plants. That’s one reason Xcel estimates the entire plan’s effect on Minnesota electric rates would be moderate — about 2.4 percent annually through 2030. Recent rate hikes have been higher.”

While Xcel Energy isn’t the first utility to say it can comply with the Clean Power Plan, Jeff Deyette of the Union for Concerned Scientists says: “What’s unique about this is you have got a major utility in a coal-intensive region … making decisions demonstrating that utilities can in fact cost-effectively invest in these technologies and transition themselves to a much lower carbon profile in a fairly quick fashion…Xcel should be touted for that.”

What’s more, Xcel Energy believes that not only does their plan exceed CPP compliance obligations in Minnesota, they will also have excess allowances that can be used to reduce compliance costs for their customers in neighboring states. Xcel is not inherently unique — they are simply embracing market trends and opportunities in a way that benefits both their company and their customers. Other utilities in the Midwest can follow Xcel’s lead in utilizing extremely low-cost wind power to both meet customer needs and comply with environmental regulations.

This article was originally published in the American Wind Energy Association’s INTO the WIND blog, and was republished with permission.