Crowdsourcing is taking off in almost every area one can imagine – including energy. In fact, energy was one of the first areas to be crowdsourced, but under the very unsexy name, “feed-in tariff.” Congress passed the first crowdsourcing of energy law, under the also-very-unsexy name, the Public Utilities Regulatory Policy Act (PURPA), in 1978.

PURPA required states to create programs under which utilities offered a set price to anyone who could produce power from a “qualifying facility,” which included renewable energy like wind or solar power. The price was made public beforehand and long-term contracts were offered. These features created the market certainty that, lo and behold, created the first boom in renewable energy in the world, right here in California, in the 1980s and early 1990s.

PURPA was responsible for an “embarrassment of riches,” as the California Public Utilities Commission described it at the time, in terms of a boom in renewable energy projects. This era created the global wind industry, which has now reached 300 gigawatts of installed capacity. That’s real power, made possible through a policy that essentially crowd-sourced power.

A couple of decades later, Germany’s similar policy did the same thing for solar power. We’re now at about 100 gigawatts of solar power installed worldwide. Solar is growing much faster than wind nowadays, and will likely surpass wind in a few years.

Germany’s energy miracle – they have reached more than 20 percent renewable electricity in about one decade – was made possible by policies that unleashed the ability of every Joe and Jane farmer to make money from selling power to the grid. This is the essence of what a feed-in tariff is, the essence of what crowdsourcing energy is. The crowd is big in Germany, with over 1.1 million homeowners, landowners and businesses selling solar power from systems 10 kW and below. A 10-kW system can fit on a small barn roof. Almost one million of these systems were installed in just the last four years.

Germany has now installed almost 35 gigawatts of solar in just 12 years. This is enough solar to at moments supply 40 percent or more of German peak power demand, and about 5 percent of total system power.

In fact, solar PV was the largest source of new generation in Europe in 2011 and 2012. This is remarkable for a technology that has been pooh-poohed for decades as an inconsequential plaything of environmentalists. A recent report from the International Energy Agency found that 61 percent of solar installations in 2012 were driven by feed-in tariffs. There is now a global crowd that has been literally empowered as mini-utilities by feed-in tariffs.

Japan is another very impressive recent example. After the Fukushima nuclear disaster in early 2011, which led to the entire nation’s fleet of nuclear plants being shut down, Japan created its first broad-scale feed-in tariff. This new policy is on track to produce over five gigawatts of solar power in 2013. That’s as much power as a large nuclear plant. It takes at least a decade to build a new nuclear plant, and this has been achieved with solar power in just one year. 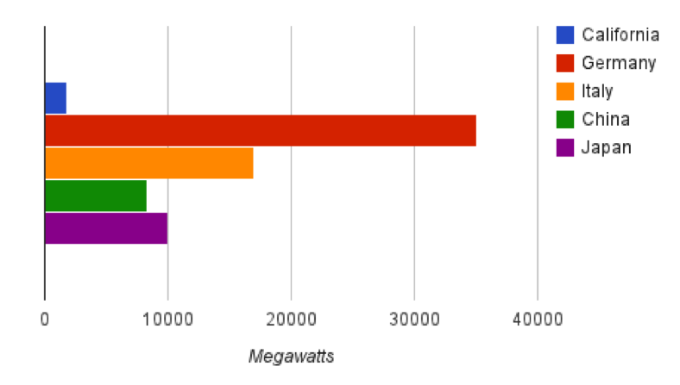 Just as important, these policies have helped dramatically reduce prices for these technologies. It’s a virtuous cycle: as feed-in tariffs help deploy solar and other renewables at scale, the prices are reduced, and the reduced prices make it possible to deploy even more solar at less cost.

Some observers criticize the German example as an expensive exercise in “renewables at any cost.” The prices paid did indeed start at a fairly high level, but prices have come down dramatically in recent years – from 55 euro cents per kilowatt hour in 2004 for systems between 40 kW and one MW, to just 12 euro cents per kilowatt hour in 2013. That’s a reduction of almost 80 percent in nine years.

The cost of solar power has fallen about 10 percent for every doubling in capacity over the last few decades. We are now at the point where solar power can compete with fossil fuels, without subsidies, for peak power. And we are not very far at all from competing with even non-peak power, particularly as energy storage technologies undergo the same transformation that wind and solar power technologies have experienced. Scale is the best way to reduce prices for any technology, so as storage technologies get deployed at scale it is all but certain that costs will come down dramatically.

Wind power has also come down in cost dramatically.  A recent study from Lawrence Berkeley Laboratory, which produces annual reports on the wind and solar markets, found that the cost of wind power has fallen 39 percent in low wind speed areas in the last six years. This is because turbines are getting bigger and, in particular, longer blades are being used in order to harvest more wind. The cost has fallen a bit less in higher wind speed areas. Wind power has been competitive with wholesale power rates for a number of years now, so cost is not a major issue.

What Happened to California?

While California pioneered energy crowdsourcing in the 1980s and 1990s, the federal law and state policies also changed – there isn’t a feed-in tariff in California. We do have the California Solar Initiative, which is a different type of crowdsourcing of energy. It’s been highly successful at its stated goals, but as I wrote recently, and as Figure 1 shows, it’s significantly less ambitious than what has been achieved by similar jurisdictions like Germany, Italy, Japan or China.

For California to return to its lead on energy issues, we should look again to the crowd. By offering a cost-effective feed-in tariff, with set rates under a long-term contract, we could unleash a second energy revolution. If Germany, with solar resources on a par with Washington State (that is, really bad), can achieve 1.1 million distributed solar energy systems in about a decade, imagine what California can achieve with similar policies?

California’s top energy policy focus should be a cost effective feed-in tariff that unleashes the power of the crowd to create a distributed and highly resilient electrical grid. If costs are limited to what power would otherwise cost from natural gas power plants, why wouldn’t utilities be required to consider any and all offers from renewable energy producers? This is what I mean by a cost-effective feed-in tariff.

This cost-effectiveness criterion undermines the automatic critiques of those who are believe feed-in tariffs are too expensive. The bottom line is that there is nothing that requires feed-in tariffs to offer above-market rates. I’m simply suggesting a market rate should be offered and we’ll see how the renewable energy market — the crowd waiting to be unleashed – responds.

Community Choice is about to take off in California and other states. Marin County, the first Community Choice jurisdiction in the state, offers consumers 50 percent renewable energy at no extra cost compared to PG&E. Marin also now offers a feed-in tariff for projects up to 1 MW. Their first feed-in tariff project is a solar facility at the San Rafael airport.

Importantly, Marin County is now allowing other cities and counties to join in their Community Choice umbrella, which should make the process far less burdensome and time-consuming for new jurisdictions to take control of their power mix.

As Community Choice takes off around the state, it is all but certain that these jurisdictions will crowdsource as much energy as possible. Allowing homeowners and businesses to make money by selling renewable power to the grid is an obvious crowd-pleaser and will do much to increase support for Community Choice. This option should set off a virtuous cycle of competition between investor-owned utilities like PG&E and Southern California Edison to see who can crowdsource the most energy and thereby establish good will from their ratepayers.

It’s an interesting time for energy in California and I hope before too long policymakers will finally recognize the virtues of crowdsourcing energy under the German model – which began as a California model until we unwisely renounced that earlier highly successful approach.